Parliament is coming out with plan to discuss revising law on the Bank Indonesia, which many fear will erode the central bank’s independence. It seems to be heavily favoring the government.

FINANCE Minister Sri Mulyani Indrawati started her press conference on Friday, September 4, by mentioning the President. Flanked by senior ministry officials, she opened the session by saying that President Joko Widodo has asked her to explain the government’s position on plans to reform the financial system’s stability. “The President’s explanation is clear: monetary policies must remain credible, effective, and independent,” she said.

One hour before Sri Mulyani began this online media session, President Jokowi discussed the same topic with chief editors of a number of media organizations who have been invited to the Bogor Presidential Palace. In addition to explaining the financial reform plans, Jokowi also spoke about plans to revise the Bank Indonesia (BI) Law, which were rolled out by the House of Representatives’ (DPR) legislation body on Monday, August 31.

This financial system reform has already been the talk in the past two months. However, this Bank Indonesia Law revision plan has been an added headache for market players and analysts. The rupiah’s exchange rate on Friday, September 4, closed at Rp14,865 to the US dollar, 1.6 percent down from the beginning of that week.

Jokowi underlined that the Bank Indonesia Law revision was an initiative from the DPR and has not been discussed with the government. “The government’s position is that BI’s monetary policies must be credible and independent,” the president said.

BI’s eroding independence is dominating concern among investors surrounding the plans to revise the Bank Indonesia Law. This issue overshadows other plans in the revision draft prepared by the legislation body, such as the removal of the Financial Services Authority’s (OJK) jurisdiction to oversee banks and return it to the central bank.

The draft, for example, includes plans to form a monetary council. This highest authority in the central bank will be led by a minister. If this were realized, BI will basically be headed by the executive branch, just like it did during President Suharto’s New Order era. Debates regarding these chapters are heard in the inner circle of the legislation body.

“Did you draft this text?” asked Benny K. Harman, a legislation body member from the Democrat Party. His question was addressed to Widodo, an expert within the legislation body, who read out the initial draft of the Bank Indonesia Law revision in a meeting on Monday, August 31. “No, I’m only the one reading it, Pak,” Widodo replied. “I would like speak with the person who drafted this text. So, I won’t continue my questioning,” Benny answered.

When contacted by Tempo on September 4, Benny pointed his finger at the government as the party which wrote the initial draft of the revision. “It must be the Palace through its network in the DPR,” he said.

PLANS to reform the financial system has been the topic of public discussion since early July, when rumors circulated that the government was considering giving back banking watchdog authorities to the central bank from the OJK. A source at the Presidential Palace said this idea came up because Jokowi was disappointed in the OJK’s performance in overseeing the banking industry.

The President was disappointed, among others, about OJK’s handling of the Muamalat Bank, the source said. A number of OJK reports to the president noted that the search for new investors for the bank was already sorted out, and only needed administrative handling. However, Muamalat’s transfer of ownership has yet to happen.

Jokowi, the source continued, was also unhappy about OJK’s handling of Bank Bukopin. OJK was seen as not being firm enough in dealing with Bukopin’s capital problems, which actually already reared its head in 2018, when the bank had to revise its past three annual reports. Those two problems, in addition to the case of state insurer Asuransi Jiwasraya, has made Jokowi lose his patience with the OJK.

OJK Chairman Wimboh Santoso, in an interview with Tempo on Thursday, August 27, said that OJK’s banking supervision has been adequate. He pointed out that banking problems which had been discovered was thanks to OJK’s scrutiny. “However, we never publicize those problems,” Wimboh said.

According to regulations, he continued, the OJK always asks bank owners to solve their problems. Only if the owner is unable to do this, then the OJK will summon the other stakeholders. “If they are still unwilling to do so, then we will hand it over to the Deposit Insurance Corporation (LPS),” Wimboh said.

When the Covid-19 pandemic broke out, the central bank also aggravated the President. This time, it was due to the rising budget deficit due to the handling of the impact of pandemic. BI was seen as not being supportive enough towards the government in budget financing, as it did not realize plans for purchasing bonds soon enough on the primary market.

Two other sources who know about these polemics between the government and BI said that another problem arose when the central bank declined a request for a short-term loan for Bukopin Bank, which was overdrawn when customers wanted to withdraw their savings. BI, the sources said, declined because the collateral appraisal was not renewed. Until Saturday, September 5, BI Governor Perry Warjiyo has yet to answer Tempo’s questions regarding the above matters.

This accumulation of disappointments, according to the source, led Jokowi to the idea of changing the leadership in those two independent institutions. “The way to do this is by revising the law.” 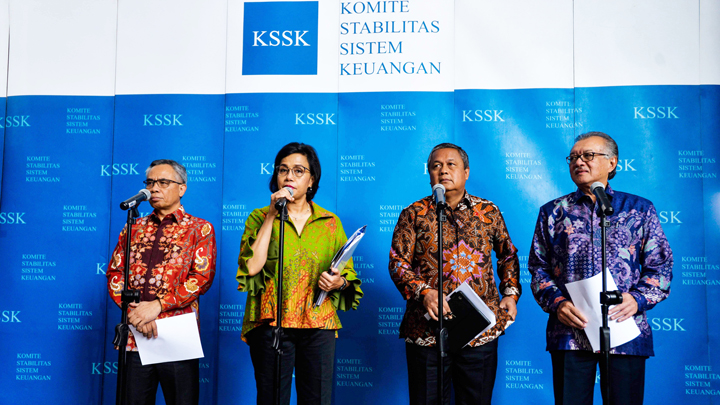 So, when the government and the DPR revised the National Legislation Program (prolegnas) on July 2, the Bank Indonesia Bill started appearing as part of the 2020 Prolegnas. Two politicians from the Indonesian Democratic Party of Struggle (PDI-P) and Gerindra parties, who took part in the discussions, separately said that initially the government proposed two draft law revisions to the prolegnas: one on the Indonesian continental shelf, and the other on the central bank. The government, represented by Justice and Human Rights Minister Yasonna Laoly, finally agreed that the Bank Indonesia Bill is to become the DPR’s proposal through the legislation body. Even so, the academic text and the law’s revision draft came from the government. “The government borrowed legislation body’s hands,” one politician said.

These two Tempo sources also said that the ministry of national development planning/national development planning agency (PPN/Bappenas) compiled the initial draft. Not long after the agreement on July 2, Bappenas on July 10 concluded a draft titled Proposal of the Bank Indonesia Law Revision (Including the Return of Banking Regulation and Supervision to Bank Indonesia). Tempo obtained a copy of this document, which was accompanied by an academic text  with a note “Draft Ver. 1.”

This text is the blueprint of the draft law read out by Widodo at the legislation body meeting on August 31. The content of both documents was practically identical, aside from some minor differences. The “monetary council” in the legislation body draft, for example, was called “monetary policy committee” in the Bappenas draft.

Yasonna, when contacted by Tempo on September 4, did not answer when asked about the agreement on July 2. Meanwhile, National Development Planning Minister/National Development Planning Agency Chief, Suharso Monoarfa, denied reports that his ministry was tasked to outline the draft. Suharso said that the Bank Indonesia Bill proposal came from the DPR, not the government. “It’s no longer done like that,” he said in a telephone conversation on September 4.

However, Suharso admitted that he became a source for the United Development Party (PPP)—the party that he leads—Faction in the Bank Indonesia Bill discussion. That discussion also took place in July. “If the material has already become property of the DPR, then ask the DPR,” Suharso said. “If it is then taken to the legislation body and was proposed (by them), that is their political right.”

Ahmad Baidowi, legislation body deputy chairman from the PPP Faction, also denied reports that the draft read out by the legislation body expert staff came from the Bappenas. In tandem with what Suharso said, Baidowi pointed out that his party organized a discussion in their faction room in July. “According to the Bappenas chief, BI has indeed been insufficiently involved in handling the (Covid-19) pandemic,” Baidowi said when contacted on September 4.

He claimed that the draft outlined by the legislation body was done by experts. The writing was done at the chief’s meeting room on August 27. “I only included my thoughts which came from discussions with the Bappenas,” Baidowi said.

Why, then, was the draft practically identical to Bappenas’ draft? “I don’t know. Legislation body experts can obtain material from anywhere.”

WHILE the Bank Indonesia Bill came out first, the government has actually been planning on a monetary system stability reformation through regulation in lieu of law (perpu). Finance Minister Sri Mulyani divulged the government’s plan in a discussion session on July 27.

It turns out that three days prior to that, after a working meeting with the DPR’s Finance Commission, Sri also mentioned plans for issuing the perpu to the DPR. “Sri Mulyani said the government has little patience and wants to issue a perpu on this,” said Hendrawan Supratikno, a Finance Commission member from the PDI-P, while he was present at the reading of the initial Bank Indonesia Bill at the legislation body on August 31.

Plans to issue the perpu also prompted the legislation body to rush the issuance of the Bank Indonesia draft law. Several DPR politicians believe this strategy was meant to remind the government of Parliament’s presence, and that it must be included in drafting laws. “The government will surely appreciate DPR’s task as the outliners of laws,” said Heri Gunawan, a Gerindra Party politician at the Finance Commission.

The goal of the framework includes creating a coordinating system among institutions in the Financial System Stability Committee (KSSK), so as to analyze and recognize potential problems in the financial services sector. Sri also explained government’s efforts to review the integration of macroprudential regulations, until now handled by the central bank, and microprudential regulations, which encompasses banking supervision under the OJK. “Indonesia once applied a system in which the banking supervision and monetary authorities were under one roof, and a divided system as it is at the moment,” Sri said. “Each system has its pros and cons, which all must be carefully reviewed in order to strengthen the banking supervision system.”

An official in the financial sector and a source close to the Presidential Palace separately told Tempo that the government has formed two teams to prepare the perpu. The first team comes from KSSK lead by Minister Sri Mulyani as the coordinator of the committee. “This team consists of moderates,” the source said. The second team is in another ministry. “This one is progressives.” The latter team, the source said, is aiming for easing liquidity assistance from BI to banks who are short of cash.

Asked about plans to issue the perpu, the President did not give a firm answer. To the media chief editors at the Palace on September 4 he only said that the country must guard the financial system’s stability. The government, Bank Indonesia, the OJK, and the LPS must carefully guard this together. “BI and the OJK must also maintain a good relationship,” Jokowi said. On Monday, August 31, he summoned Perry Warjiyo and Wimboh Santoso to the Bogor Palace.