Palace Envoys at the Elections Arena


Security apparatus and government bureacrats are indicated to providing assistance for President Joko Widodo’s family members in the regional head elections. The win of the President’s son is practically inevitable.

A BEHEST to gather at a local neighborhood administration office in the Medan Perjuangan subdistrict, City of Medan, North Sumatra, was posted in the WhatsApp chat group of the neighborhood head on Friday, October 16. Showing the text message to Tempo on Wednesday, December 2, Mahfud—not his real name—related how he set off immediately to the designated place of appointment. He was one of 20 or so neighborhood unit heads in the meeting.

According to Mahfud, in the said meeting, the village head made a request that each neighborhood chief assist in enabling a winning vote for Medan mayor and deputy mayor candidate-pair, Muhammad Bobby Afif Nasution and Aulia Rachman. The village head instructed the participants to garner data of 55 voters who could support the pair with the Number Two ticket. The data requested included specific addresses, phone numbers, and their ID numbers. “The village head also requested that Bobby get a vote-count of at least 60 percent at every polling station,” said Mahfud.

Mahfud claimed he asked from where the instruction originated. The village head, said Mahfud, replied the instruction came from his immediate superior, the Medan Perjuangan subdistrict head, Afrizal, and the North Sumatra regional police. “It would not be possible for the police to take direct action,” said Mahfud mimicking the village head’s words. The village head also conveyed a promise of reward if Bobby—the son-in-law of President Joko Widodo—win the vote. Also, Rp50,000 cash has been allocated for each voter who will vote for the pair.

A community leader in the Medan Johor subdistrict claimed he had been approached by a man saying he was a police officer. The man guaranteed the Bobby-Aulia development program will reach that specific community if only the pair can win there.

Met separately, another neighborhood head from the same vicinity related a similar story. But he added they had not only been dangled with a gift. He said all the meeting participants had been threatened with dismissal if they do not comply to the village head’s order. Disgruntled by the threat, the neighborhood chief claimed he had submitted haphazard data to the village head about a month after the meeting. On Wednesday, December 2, the village head once again called a meeting. Once again he requested that each neighborhood chief enabled the winning vote for Bobby, since his electability in the Medan Perjuangan subdistrict is not yet secure.

Internal survey of Bobby-Aulia winning team obtained by Tempo showed the pair had a leading margin against their rivals, Akhyar Nasution-Salman Alfarisi, in the Medan Perjuangan subdistrict. In the 68-page document, the Bobby-Aulia pair’s electability hold at 40 percent, while Akhyar-Salman only reach 17.5 percent. But, 42.5 percent of respondents withhold information on who they will vote for. Voter numbers in Medan Perjuangan total some 73,000 people.

The same survey showed Bobby-Aulia’s electabilty rating in Medan reach 36,3 percent, with Akhyar-Salman reaching 27.8 percent. Some 19 percent voters withhold information on who they will vote for, while 17 percent are undecided.

Medan Perjuangan subdistrict head Afrizal admitted he had gathered the village heads in his region in a meeting not long after the Medan General Elections Commission (KPU) determined the names of the mayoral candidates. But he denied the accusation that the meeting’s agenda was to garner a win for a specific candidate pair. “There was no vote-garnering,” he said on December 5. Afrizal said the meeting discussed voter registration listing and swab testing for people handling the polling stations.

The management of the five parties supporting the present government, namely the PDI-P, Golkar, Gerindra, PAN, and PPP, verified that government apparatus had indeed been dispatched to assist Bobby to win. A case in point is the dispatch of police to the neighborhood association level. A community leader in the Medan Johor subdistrict, Wahidin Surya, claimed he had been approached by a man saying he was a police officer. The man guaranteed the Bobby-Aulia development program will reach that specific community if only the pair can win there. Wahidin said he merely listened to the request. 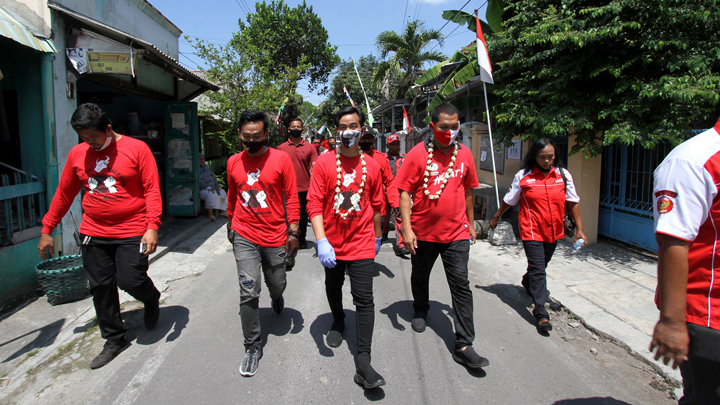 The Bobby-Aulia campaign team spokesperson, Ikrimah Hamidi, denied the pair dispatched the bureaucracy and security apparatus. It is more so because their competitor is Akhyar, who is the ad interim Medan Mayor. Hamidi asked the community simply to reveal the identities of police officers pushing people to vote for Bobby. “So that strict measures can be taken,” he said. Public Relations Chief of the North Sumatra Regional Police Chief Comr. Tatan Dirsan Atmaja refuted the notion police are not maintaining their neutrality. “Feel free to report the names and ranks of the officers to us,” he said.

The issue of state apparatus not maintaining their neutrality has often been raised by the Akhyar-Salman team. Secretary of the Akhyar-Salman winning team, Wasis Waseso Pamungkas, said Akhyar had complained about police escorts and ever-increasing mass support from government officers pushing their rivals’ ticket. “We sincerely hope they can act more professionally and not join in the contest,” said Wasis.

Three high ranking officials from political parties assisting in the wining for Bobby said the Palace is also watching the Medan regional election closely. One of the indications is by dispatching Devid Agus Yunanto to go to Medan. Devid is known for being close to President Joko Widodo ever since the latter was mayor of Solo. He was brought over to City Hall and eventually the Palace after Jokowi won the Jakarta gubernatorial election, and later the presidential election.

Wasis Waseso Pamungkas, who is also a politican from the PKS, admitted to having met with Devid prior to candidate registration at the KPU. According to Wasis, in the meeting, Devid suggested the PKS to support Bobby. “But we refused,” he said. Devid denied being commissioned by President Jokowi to safeguard the Medan regional head election. “That’s not true at all,” he said. Presidential Spokesman, Fadjroel Rachman, did not reply Tempo’s questions regarding the Palace’s involvement.

BESIDES the son-in-law running for office in the regional head elections, the President’s eldest son is also a candidate in the election that will be conducted on Wednesday, December 9. Pairing with Teguh Prakosa, Gibran Rakabuming Raka is in direct competition with the independent candidate pair Bagyo Wahono-F.X. Supardjo. Head of the PDI-P General Election Body Bambang Wuryanto is optimistic Gibran will get a solid win in Solo, Central Java. “Survey results on November 28 show Gibran’s electability is now at 82 percent,” said Bambang on December 2.

The Central Java PDI-P chair said Gibran’s vote potential could go over 90 percent. The reason being, Jokowi once garnered that many votes when he won the Solo regional head election in 2010. But Bambang also assessed, Jokowi’s win at the time was purely because of the community’s outstanding satisfaction with his performance, particularly in the economic sector.

Three party officials assisting for the win in Solo said that Gibran’s victory is inevitable. It is more so because his rival had only ‘suddenly appeared’ and submitted 38,831 ID cards when registering as an independent candidate. In September, Bagyo Wahon refused the accusation of being a ‘puppet’ candidate. He claimed he had been preparing for the fray long before Gibran’s name bubbled up in the Public Policy Laboratory survey by Slamet Riyadi University in July 2019. “I had prepared myself for two years,” said Bagyo.

While Gibran is said to be a sure win, his supporting parties continue to be busy garnering further support. All the high ranking officials of political parties met by Tempo said President Jokowi had not made an outright request to get a win for his son in Solo. But despite no request, they said, the political parties obviously would lend a hand for Gibran’s win. The same applied in Medan, to garner a win for Jokowi’s son-in-law, Bobby Nasution.

Golkar Deputy General Chair Ahmad Doli Kurnia, for example, admitted to having visited Medan four times to garner support for Bobby. The last time, the chair of the Golkar general election winning body arrived with senior party member, Akbar Tandjung, on December 1. Akbar is the chair of the Golkar advisory board while also being the former general chair of the Islamic Students Association (HMI) Central Board. According to Doli, they met with several Muslim figures in Medan, and  also the HMI alumni corps. “Golkar Party instructed all its cadres to support its candidates, including the Bobby-Aulia pair,” said Doli.

Vote-getting from Islamic groups is carried out by Bobby-Aulia as their rivals Akhyar Nasution-Salman Alfarisi have gained support from Abdul Somad Batubara on Monday, November 30. At the time, Somad reminded Akhyar-Salman to work well if they do win in the upcoming election. “Preacher Somad’s support for sure will add voters for us,” said Wasis Waseso Pamungkas.

PAN also dispatched their elite to Medan and met with Bobby on November 24. In the meeting, according to PAN Secretary-General Eddy Soeparno, Bobby conveyed the PAN machinery was not yet working at a maximum. Internal survey result done by Bobby’s team showed only 43 percent of PAN voters support him.

Eddy requested all party cadres go all out to wrest a victory for Bobby-Aulia. He even threatened to dismiss those cadres holding positions in the Medan Regional Council (DPRD) and the North Sumatera DPRD if Bobby lost in any five polling stations around the vicinity of their abodes. “In the remaining time we have left, let us work hard to get a win for Bobby-Aulia,” he said. The PDI-P also dispatched many of their cadres in North Sumatra and at the national level to campaign for Bobby-Aulia. 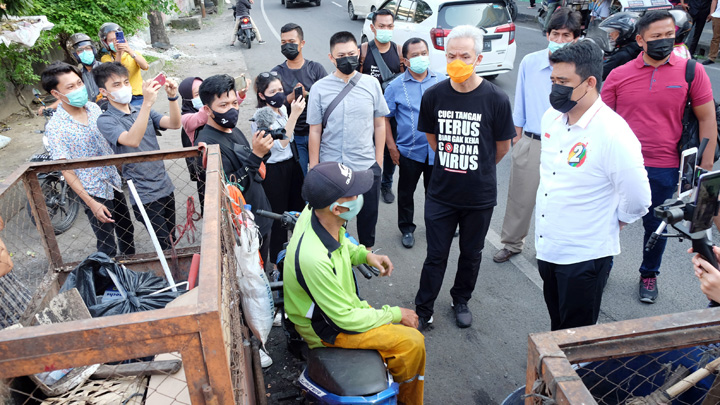 Besides the Muslim groups, Bobby is also targeting the minority groups. A source in the know about the strategy said certain special persons were charged with approaching leaders of other faiths. In early January, for example, Bobby met with Medan Archbishop Monseigneur Cornelius Sipayung. According to the same source, Bobby also had a team approaching residents of Chinese descent.

The support from political elites from Jakarta and North Sumatra to win Bobby is simply because Bobby’s win is not yet secure. A survey by the Citi Research Center showed the Akhyar-Salman electability at 35 percent, and that of Bobby-Aulia at 29.25 percent. Meanwhile, the Survey and Dissemination Body of the North Sumatra State Islamic University showed the Bobby-Aulia electability at 31.3 percent, and their rivals at 20.8 percent. Similar in the two surveys, also in their internal surveys, was the level of undecided voters which remain high and have potential to impact the election results.

Former deputy IV of the presidential staff office, Eko Sulistyo, who helped the win for the Joko Widodo-Jusuf Kalla pair in the 2014 presidential election, said Jokowi and his family had never directly made statements for those sent to Medan and Solo to help boost the victory for Bobby and Gibran. “But the family I’m sure gave Bobby and Gibran their blessings,” he said.