The construction of the Trans Sumatra toll road in Riau and Lampung left unresolved land conflicts. Compensation is inadequate, and for many residents, slow to arrive.

LEON Liawandi stared blankly at the Pekanbaru-Dumai toll road in Riau. The resident of Senapelan village in Pekanbaru then pointed at the roads and explained that the concrete sits on what used to be his palm field. The toll road split his equally expansive palm field in half.

Leon used to live 800 meters away from his fields. After it was split in half, he and his wife must now take a four-kilometer detour to reach the other side of his fields. “The developer only left a dirt road,” said the 48-year-old on Wednesday, December 16. “The roads get slippery when it rains and vehicles can’t get through.”

Due to these constraints, Leon could not visit his oil palm plantation as often. The trees became withered and unkempt. He also needs additional costs to transport the palm fruits after harvest. “(Money gained from) the harvest is used up for transportation costs,” he said. Leon is no longer passionate about picking palm fruits when they are ripe.

Leon’s family owns about one hectare of oil palm plantation. He handed about 3,000 square meters over to the government for the toll road construction in 2015. Leon received compensation of Rp65 million. “I was forced to accept it,” he said. “If we refuse, the money will go to the regional treasury and we will not be able to use it.”

In Senapelan, there are dozens of residents who have experienced the same fate as Leon. Life has become difficult since a toll road cut across their plantations. Landowners plan to close the access road if the government does not immediately respond to their request, namely to make a proper road to the plantations. 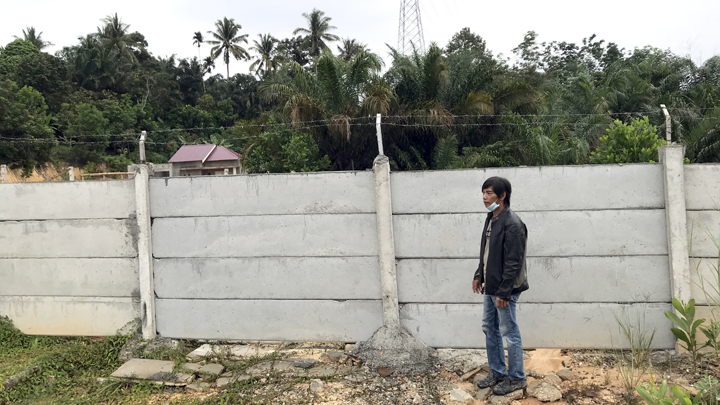 Leon, 48 years old, is showing the access to his home and plantation that was closed by Hutama Karya in Rumbai subdistrict, Pekanbaru, Riau./ Riri Radam

The 140-kilometer Pekanbaru-Dumai toll road stretches from Pekanbaru, Siak, Bengkalis, to Dumai. The construction of the road which is part of the Trans Sumatra Toll Road was carried out by Hutama Karya in 2016 and inaugurated by President Joko Widodo on September 25.

Since the beginning, the construction of this toll road has been contentious, especially in the land acquisition process. Not all landowners were willing to give up their property like Leon. They refused on the grounds that the compensation value was too cheap. Such refusal was taken by a number of residents of North Kandis, Siak Regency, Riau. They created the Forum of Community Seeking Justice (FMMK). Its mission: to refuse handing over land because they feel that they were not included in determining land prices. Additionally, their lands were only valued at Rp18,000 per square meter. The residents calculated that the compensation value should be Rp150,000 per square meter.

Despite residents’ adamant refusal, Hutama Karya continued its construction. When they sent heavy equipment that leveled people’s plantations, the police escorted them. “We have complained here and there, even written to the president,” said Benny Hasiholan Siregar, chairman of the FMMK.

Other residents took legal action, such as Suyatno Lumbang Batu, who sued the eviction at the Siak District Court. At the first instance court, Suyatno won. The panel of judges agreed with the value of compensation proposed by Suyatno. However, the Riau High Court overturned the decision so that the price of the land returned to Rp18,000.

Having no choice after taking various means, many residents protested by closing the toll road. On August 25, residents of North Kadis closed the toll gate next to their village. “We will continue to close this road until the government fulfills our rights,” said Jonatan Ginting, 83 years old.

Land disputes also plague the Bakauheni-Terbanggi Besar toll road project in South Lampung, the starting point for the construction of the Trans Sumatra Toll Road project. Although the 140-kilometer road section was inaugurated on March 8, 2019, not all residents have received compensations. As many as 88 families in Sukabaru village, Penengahan subdistrict, South Lampung, claimed they have not received payments for their land.

Many residents had to change their jobs because the only land they owned was taken by the government. Pardi, a landowner, was forced to work odd jobs after the 0.5-hectare of his corn plantation was taken by an official offering a price of Rp120,000 per square meter. Pardi and other villagers agreed because they thought they could use the compensation money to replace their lands elsewhere. The officers never came back to their village. “I’ve only received Rp5 million,” said Pardi, who is 60 years old. 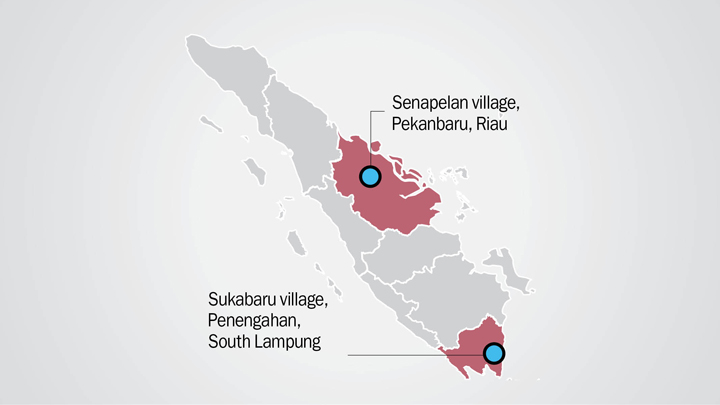 Suradi, chairman of the Sukabaru Community Working Group, said that the total land area of the community that has not received compensation in his village is more than 100 hectares with a value of compensation—based on the offer from the said official—of Rp120 billion, or at least Rp23 billion.

An official from the South Lampung government said that payments were delayed because the people’s land was included in the Pematang Taman Register 2 Production Forest area. Refusing to believe the claim, the residents filed a lawsuit regarding the broken promise to the Kalianda District Court. “We are suing with sporadic land certificates,” said Suradi. “The trial is still ongoing.”

Responding to the toll road project compensation disputes, Commissioner for Monitoring and Investigation of the National Commission on Human Rights, Mohammad Choirul Anam, said the project was indeed chaotic from the start. According to him, the government was not open about the conversion of functions and land compensation from the start. “Negotiations are full of intimidation,” he said. “The government uses the excuse that it is running a national strategic policy.” The construction of the Trans Sumatra road, Anam added, was also not equipped with a comprehensive study regarding the impact of evictions.

Chief of the Riau Land Office, Dedi Gusriadi, denied reports that the government had set the compensation value too low. According to him, the price at each location is determined by an independent inspection team. “We do not interfere in determining prices,” he said.

Hutama Karya Corporate Secretary Muhammad Fauzan said that lands in Riau and Lampung are often disputed. He said that some of the land is also state-owned. This is what has been delaying compensation for residents, according to Fauzan. “The court will decide whether the people’s lawsuit is accepted,” he said.

Regarding community access being disrupted due to the toll road, Fauzan said his company intends to build a crossing bridge, although in limited number. The distance between the bridges will be adjusted to the mobility of the population. Fauzan admitted that many people have suffered losses due to the construction of the Trans Sumatra Toll Road. “But many more have benefited,” he said.