The National Commission on Human Rights and the police have differing versions regarding how the six bodyguards of Rizieq Shihab died. The National Police Criminal Investigation Department encountered difficulties in investigating officers involved

THE investigation on the second floor of the National Commission on Human Rights (Komnas HAM) ended near midnight on Monday, December 28, 2020. For nearly 12 hours, two investigators from the National Police Criminal Investigation Department (Bareskrim) asked the testimony of a witness of the ambush of six bodyguards of the leader of the Islam Defenders Front (FPI), Muhammad Rizieq Shihab, in the early hours of Monday, December 7. Based on Tempo’s observation, the marathon investigation was a closed one.

Bareskrim’s Director of General Crimes Brig. Gen. Andi Rian Djajadi said the witness was a tow truck driver. He was in the Kilometer 50 Rest Area when officers from the Jakarta Metropolitan Police surrounded the Chevrolet Spin car which bore license plate number B-2152-TBM carrying six members of the Laskar Khusus FPI (FPI’s special militia). “His testimony was similar to that of other witnesses,” Andi told Tempo on December 30.

The Bareskrim on December 19 had taken over the investigation into the deaths of the six members of FPI militia from the Jakarta Metropolitan Police. Based on the police’s reconstruction, said Andi, the vehicle used by Rizieq’s guards abraded the police car tailing Rizieq from Sentul as he headed towards Karawang, West Java. Open fire occurred forcing the Chevrolet Spin to stop at the Kilometer 50 Rest Area. 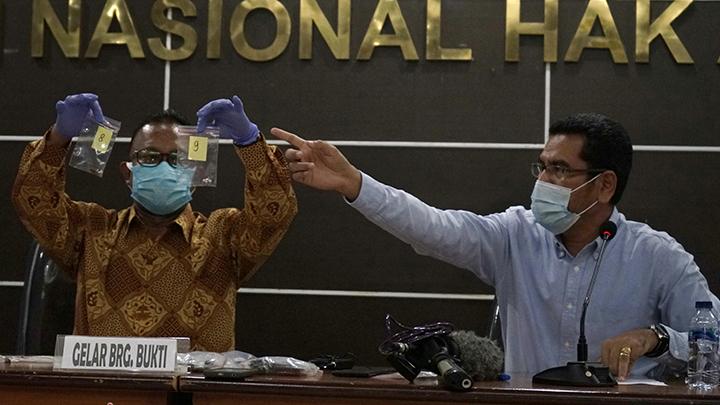 The police cornered the six men and their car into the rest area. Two laskar members sustaining gunshot wounds were moved to another vehicle. The remainder, who were not hurt, were herded into a Daihatsu Xenia police SUV. According to Andi, on the way back to Jakarta, police shot the four militia members as they tried to wrest weapons from police officers in the vehicle. The incident occurred on Kilometer 51 of the toll road.

An official investigating the incident said the tow truck driver was called to take away the Chevrolet Spin from the rest area. But, because the car had two flat tires and the engine had gone dead, the driver asked for assistance from a crane towing vehicle. The driver witnessed the removal of Rizieq’s non-handcuffed troops into the Xenia police car through the back door. The removal was carried out after a Toyota Land Cruiser arrived at the rest area. A passenger came out from the vehicle and gave instructions to several of the police officers there.

The driver’s testimony differed from the statement made by Metropolitan Jakarta Regional Police Chief Insp. Gen. Fadil Imran. After the incident, Fadil stated six FPI personnel had been shot at Kilometer 50 of the Cikampek Toll Road after a police car was abraded and attacked with firearms and sharp-bladed weapons. Fadil also said four of the FPI troop members ran away. Andi verified the driver’s testimony that police did not open fire while at Kilometer 50. “We ascertained that no shoot-out occurred there.”

The official investigating the incident also related how the tow truck driver also passed Kilometer 51 not long after his colleague, the crane driver, towed away the Chevrolet Spin owned by the FPI men. He saw no incident there as he headed toward the Karawang Timur exit to make a turn and head back to Jakarta. This testimony conflicted with the police reconstruction, which stated the Xenia had pulled up to the roadside for a long while after the shootout incident. Andi claimed he had not studied the driver’s testimony after leaving Kilometer 50. He said the Bareskrim only looked into the incident at the rest area.

On Monday after the shootout, a cellphone signal was detected stopping at a government office in Pasar Baru, Central Jakarta. The signal was detected running close to the FPI headquarters in Petamburan, and then stopped at the Raden Said Soekanto Police Hospital in East Jakarta, where the bodies were laid. “That’s the result of our big data reading from FPI colleagues who traced the digital footprints,” said Munarman.

To date, police have examined 42 witnesses who were in the Kilometer 50 rest area of the Jakarta-Cikampek Toll Road. Deputy Chief of the Witness and Victim Protection Agency Edwin Partogi said, several witnesses were under the institution’s protection, namely those who happened to be in the rest area and witnessed the arrest of the six FPI militia members. “For safety’s sake, we have continued keeping an eye on their activities,” he said.

INVESTIGATING the case of the death of Rizieq Shihab’s six bodyguards, the Komnas HAM has repeatedly combed the car chase route around Karawang. They found seven projectiles and four cartridges along the West Karawang International/Interchange Road heading toward the West Karawang toll gate. The Commission also found several car bumper shards around a kilometer before the roundabout near the Novotel Hotel, on the Karawang Interchange Road.

Investigation team head, Choirul Anam, suspected the skirmish occurring between the FPI and the police’s vehicles happened while they were still far away from the Novotel Hotel. “On the north side of the roundabout, we found shards of glass. The items were identical to the glass of the Chevrolet’s headlights,” said Anam. This description differed from the police’s explanation that a clash had ensued on the roundabout close to the Novotel Hotel. Police said a shootout then erupted. The location was the first crime scene in the reconstruction version conducted by the Bareskrim. 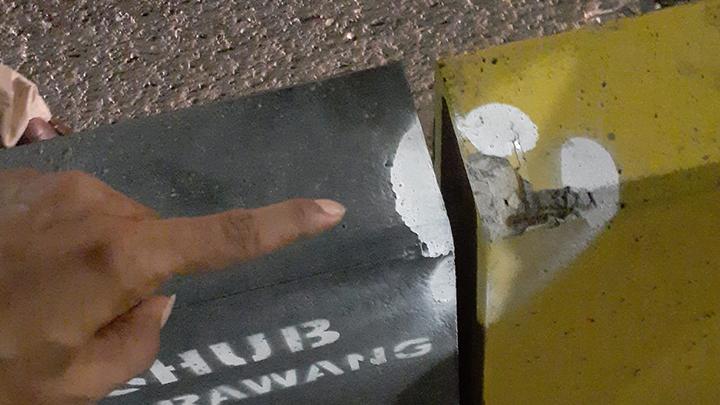 Location where projectiles and cartridges were found by the National Commission on Human Rights, marked with white spray paint, in Karawang, West Java. Photo: Tempo/Riky Ferdianto

The Komnas HAM took all the projectiles and cartridges to the Police Headquarters Forensic Lab Center on Wednesday, December 30. Anam said the inspection aimed at verifying bullet caliber measurements and the direction of the gunshots. He had not concluded the origin of the cartridges and projectiles. “But for sure later we will submit a clearer chronology,” he said.

Two people knowledgeable about the investigation process said inquiry into the deaths of Rizieq’s six guards was complicated. Bareskrim investigators said they encountered difficulties examining six police officers in the surveillance team from the Jakarta Metropolitan Police Department. Neither have investigators examined the person in the Toyota Land Cruiser which arrived in the rest area a few minutes after the FPI members’ arrest. The vehicle is believed belongs by an officer with the rank adjunct senior commissioner.

Brigadier Gen. Andi Rian denied any impediment in examining the arresting team of the FPI six. He claimed to not have heard any information regarding the arrival of a Land Cruiser. “No problem. Every time we need information, they always come,” he said.

CREATED on Sunday, December 6, 2020, at 11:41am, the “Ikan Hias Cupang Giant” (Giant Decorative Betta Fish) WhatsApp chat group comprised 12 persons. Its creator was Andi Oktiawan, a member of FPI laskar militia. The chat group was used to coordinate accompaniment for Muhammad Rizieq Shihab from Sentul in Bogor, West Java, as he headed to Karawang. Andi Oktiawan, 33, sat in front next to Muhammad Suci Khadavi, who drove the car. Andi Oktiawan suffered gunshot wounds in the left eye and on his chest. His five colleagues in the same vehicle also died sustaining gunshot wounds on their chests.

Andi Oktiawan’s cellphone is in the hands of the Bareskrim’s investigation team. Director of General Crime Andi Rian Djajadi said investigators obtained several indications from the group’s chat. “Including our suspicion they owned firearms,” he said. Almost the entire group’s communications used voice messages. Police said there were 191 conversations made during the accompaniment of Rizieq.

The conversations ended after police herded the group into the Kilometer 50 Rest Area. Police have seized the Chevrolet Spin. Documents obtained by Tempo show the front and rear bumpers of the Chevrolet were smashed. There were two bullet holes in the front windshield. Six gunshot holes also pierced the car’s right and left doors.

Police announced that Rizieq’s bodyguards that day used firearms. Jakarta Metropolitan Police Chief Fadil Imran in a press conference on December 7 showed three sharp-bladed weapons and two home-made revolvers allegedly used by Rizieq’s bodyguards. Yet Komnas HAM officer Choirul Anam cannot be certain about the firearms. “We are continuing our investigation into the matter,” he said.

From Andi Oktiawan’s cellphone, investigators claimed they found indications of the presence of firearms based on conversations that took place near end of November. Police suspected he used code names of fruit to indicate weaponry. Yet the police have not ascertained the types of weapons used. “They’re still indications. He did not say make a purchase, but a preparation was indicated,” said Andi Rian.

Munarman claimed he had heard news about the chats. He said, the conversation happened between Andi Oktiawan and his cousin. Munarman refuted the conversation indicated ownership of firearms used to attack officers, as accused by the police. “I checked it out. What they discussed was a soft-air gun, not firearms,” said Munarman.