From Scavenger Cooperatives to Wholesale Stores


Food manufacturers are innovating to reduce plastic bottle waste. Some maximize the use of recycled materials, while others support the community in its waste management.

FIVE days a week, Juleha collects and processes plastic bottle waste for the Pemulung Berdaya Cooperative in South Tangerang, Banten. At the beginning of the Covid-19 pandemic, this cooperative lost some business due to protests by residents who were worried about being infected by garbage from the red zone—an area with a high rate of coronavirus infection—even though all the plastic waste has been sprayed with disinfectant. “Things are back to normal now,” said Juleha on Wednesday, February 17.

Since its founding in 2012, the cooperative now has 58 members, most of whom used to be scavengers. Since 2020, they have collected five to eight tons of garbage per day from the target of three to four tons per day. Currently, 90 percent of plastic bottle waste comes from collectors, the rest from scavengers. In the past, scavengers gathered 80 percent of the plastic waste collected. The plastic waste is then sold to the recycling factory Namasindo Plas in Bandung, West Java.

According to Juleha, all members are involved in this cooperative. Some are in charge of collecting plastic bottle waste from collectors. There are also those who sort and process them into plastic pellets. Every day they also accept scavengers who sell directly at Rp5,000 per kilogram. “There is no minimum purchase limit,” said the treasurer of this cooperative. When calculated, the number of scavengers involved in their chain is approximately 5,000 people, both selling directly or through collectors.

The Pemulung Berdaya Cooperative was started by Danone Indonesia, Namasindo Plas is a supplier of recycled plastic materials for Danone which produces the Aqua brand of bottled drinking water. Garbage collection, management, reduction and recycling are among the producers’ obligations which are mandated in the Minister of Environment and Forestry Regulation No. P.75/2019 concerning waste reduction road maps by producers. The road map targets a 30 percent reduction in waste compared to the amount of waste generated by 2029.

According to Danone’s Director of Sustainability Development, Karyanto Wibowo, the use of recycled materials is one of the efforts to reduce plastic waste, in addition to helping integrated waste management and selection campaigns. “We still don’t use 100 percent recycled material. But we have produced packaging that is 100 percent from recycled material,” he said on February 16.

According to Karyanto, Namasindo Plas produces 12,000 tons of recycled materials per year. For material collection, the company is working with six entrepreneurs or local communities. One of them is the Pemulung Berdaya Cooperative. The other five are entrepreneurs in Bandung, Bali, and Lombok (West Nusa Tenggara).

The amount of recycled material supply from Namasindo Plas is far from sufficient. Therefore, according to Karyanto, since 2017 Danone has partnered with Feolia, a European company engaged in the recycling industry. After going through negotiations, it was agreed that there would be an investment in the construction of a recycling plant in Pasuruan, East Java.

After being built in 2018, the factory with a capacity of 25,000 tons per year will start supplying Danone recycled material starting this year. “Our target is that by 2025 at least 50 percent of our overall aggregate use of materials comes from recycling. Now it’s only 10 percent,” he said.

If Danone reduces waste by recycling, Coca Cola Indonesia will help through waste management. According to Coca-Cola’s Director of Public Affairs, Communication and Sustainability Triyono Prijosoesilo, the vision of his company’s Chief Executive Officer (CEO), James Quincey, is a world without waste. “There is an aspiration that in 2030 we will help collect and recycle as much plastic bottle packaging as we sell,” he said on February 18.

There are a number of efforts that will be made by Coca Cola. These include changing the packaging, reducing the use of virgin plastic from petroleum, using recyclable packaging and recycled materials, and working with communities to encourage waste collection. Apart from helping the waste bank and campaigning, one thing that is being done is the implementation of the Plastic Reborn program.

This program, according to Triyono, will support three technology startups that help manage waste in Denpasar (Bali), Makassar and Gowa Regency in South Sulawesi. In Denpasar, this program will support the Gringgo app, an application that connects collectors with scavengers in Denpasar. 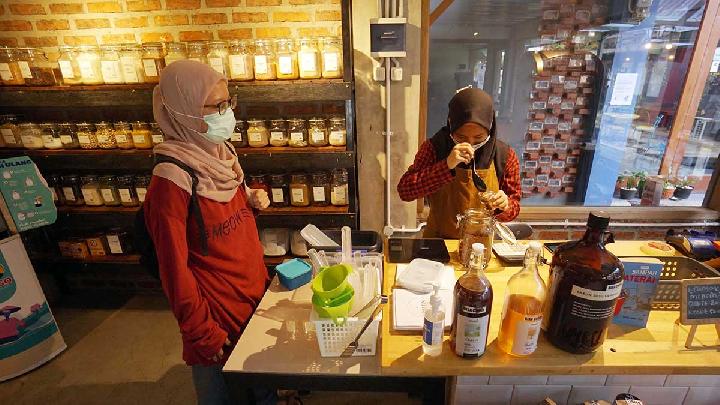 A customer waits as the employee puts the merchandise in a BYO container at Saruga, a bulk store, in Bintaro, South Jakarta, February 19. Tempo/Jati Mahatmaji

This collaboration began in 2019. According to Febri Adi Pratama—the founder and now CEO of Gringgo—this technology startup was founded in late 2014. Through the Plastic Reborn program, they collaborated with two other initiatives, namely Clean Up in Gowa and Garbage Mall in Makassar. If Clean Up is like a garbage transport service company, Garbage Mall focuses on collectors of used goods that can be recycled.

According to Febri, Gringgo in Denpasar has more than 100 networks of collectors. The function of this application is to bridge collectors with scavengers. “It’s like mediating,” he said. The benefits of cooperation with Coca Cola, he said, impacted his reach which was previously limited to Bali.

Coca Cola’s latest step is to change the color of the Sprite bottles from green to clear, since February 18. This change was made after they discovered that the price of clear used bottles was higher than green ones. Clear bottles were sold at Rp5,000-6,000 per kilogram at the collectors, while green bottles are priced Rp4,000 per kilogram. “The use of clear PET plastic bottles is more flexible,” he said.

Unilever also made initiatives to reduce plastics. According to Maya Tamimi, Unilever’s Head of Environment and Sustainability, in 2019 the company made a global commitment that by 2025 it will reduce the use of new plastics by half and increase plastic recycling. It will also use 100 percent recyclable packaging, and help collect and recycle the same amount of plastic that they sell.

One of the new innovations is the less plastic approach, which was realized in collaboration with the Saruga shop in South Tangerang. “The innovation is to sell products without packaging, in bulk,” said Maya on February 17. With this concept, consumers can buy goods without plastic and pay according to the product’s net weight.

This collaboration was launched in 2020. According to Desiree Irawati, the owner of Saruga, the shop was established in September 2018. The concept is to sell household goods, especially kitchen spices, in bulk. To shop here, consumers have to bring their own boxes. After this cooperation, Unilever sold its products in bulk, which currently are in the form of soap, shampoo, and soy sauce.

According to Maya, the challenge with the Saruga model is how to ensure that the product quality is the same as the packaged product. Therefore, Unilever ensures that the containers are clean so as not to affect the quality of the goods. “Because (it is) a new business model, this cannot be adopted elsewhere too quickly,” he said.

Desiree said that at first it was a hassle to shop like this. However, after chatting with their buyers, they said they were happy because they were “doing something for the environment.” Even though the pandemic broke out, her business could survive. Apart from being able to support five employees, this business helps micro, small and medium enterprises because they can sell their goods here.

An environmental activist from Nexus3, Yuyun Ismawati Drwiega, said that the efforts of producers to reduce plastic waste are good. “But we still need to encourage more,” she said on February 18. Yuyun assessed that the environment ministry’s road map is still less ambitious and hoped the government will also target the industry that makes the plastics, for example by imposing a moratorium and no new investment. “If necessary, apply taxes because of its environmental impact, similar to cigarettes.”