The Fast Lane for Terawan’s Vaccine


Terawan Agus Putranto is promoting the Nusantara vaccine to a number of officials. The National Institute of Health Research and Development does not fully supported research plans for this dendritic-cell vaccine. Terawan is also attaching researchers’ names without their consent.

ALMOST three months after he stepped down as health minister, Terawan Agus Putranto attended a meeting discussing a nationally produced vaccine organized by the Covid-19 Response and National Economic Recovery Committee (KPC-PEN). In the online meeting, Terawan discussed the development of the Nusantara vaccine. “He did explain about the Nusantara vaccine,” Firli Bahuri, Chairman of the Corruption Eradication Commission (KPK), told Tempo on Friday, March 5.

Firli was present at the meeting, which was chaired by KPC-PEN Chairman Airlangga Hartarto, who is also Coordinating Minister for the Economy. Also at the meeting were Research and Technology Minister/Head of National Research and Innovation Bambang Permadi Soemantri Brodjonegoro, and the research team of the Nusantara vaccine from the Dr Kariadi Central General Hospital of Semarang, Central Java. Firli said that the research team also spoke about the results of their findings so far. 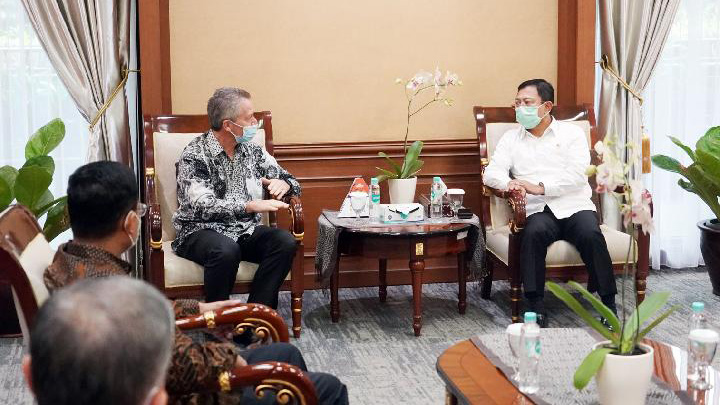 An audience between Minister of Health Terawan Agus Putranto and Hans S. Keirstead (left) from Aivita Biomedical Inc, in Jakarta, October 2020. Center for Public Communication of the Ministry of Health of the Republic of Indonesia

The Nusantara vaccine uses a method based on dendritic cells: part of the innate immune system in the body which detects intruders like bacteria or viruses and devours them. This method is used by Aivita Biomedical Inc, a company based in Irvine, California, the United States of America. Aivita has given a license to Rama Emerald Multi Sukses, a company from Surabaya, East Java, to develop research for a dendritic-based vaccine in Indonesia. This research also involves the Health Ministry’s National Institute of Health Research and Development, Dr Kariadi Hospital, and Semarang’s Diponegoro University.

A high-ranking official present at the meeting said that most attendees asked questions about the Nusantara vaccine. In fact, this vaccine is not well known. They are more familiar with the Red and White vaccine, which is being developed by the Eijkman Molecular Biology Institute, Bio Farma, and Kalbe Farma. The Red and White vaccine is still in the research and development stage, and still needs to get through the stages of vaccine development, pre-clinical and clinical testing.

Meanwhile, the Nusantara vaccine is claimed to have already been through its first clinical trials from December 23 last year, until January 6, involving 27 volunteers. Some of the meeting’s attendees asked about the vaccine’s procedures, and permits from the Drug and Food Monitoring Agency (BPOM). Research and Technology Minister Bambang Brodjonegoro said that the meeting was an introduction to the Nusantara vaccine. “Prior to the meeting, we did not have complete information, but only fractions (about it),” Bambang told Tempo.

Bambang said that one agreement reached in the two-and-a-half-hour meeting was that the Nusantara vaccine can be part of the Nusantara vaccine consortium. This under the condition that those involved in the vaccine’s research and development submit an official application to the National Team for Acceleration of the Covid-19 Vaccine Development. “So that its background and those involved become clear,” said Bambang.

Terawan was unable to be reached for comments. Efforts by Tempo to reach him were left unanswered until Saturday, March 6. Yetty Movieta Nency, a Nusantara vaccine researcher, declined to comment on the meeting. “We cannot give any information yet, because we are focusing on our research,” she said when contacted on March 5.

THE Nusantara vaccine became known after the House of Representatives’ (DPR) Health Commission visited Dr Kariadi Hospital on Tuesday, February 16. During the visit Terawan Agus Putranto, who accompanied the DPR members, said that the Nusantara vaccine is a revolutionary one as it uses the dendritic-cell method. “In the future it can be mass produced to up to 10 million a month,” said Terawan. He was optimistic that with this volume, Indonesia can independently produce Covid-19 vaccines.

Emanuel Melkiades Laka Lena, Deputy Chairman of the Health Commission, said he spoke to Terawan regarding the vaccine. To the Golkar Party politician, Terawan said that he has been looking for a Covid-19 vaccine since August 2020. At that time, President Joko Widodo directly ordered him to look for a vaccine that can be used in Indonesia. Melkiades said Terawan also wanted the vaccine to developed and produced domestically. Siti Nadia Tarmizi, spokesperson for the Health Ministry’s Covid-19 vaccination, said her department has already been preparing the Nusantara vaccine for a while.

A researcher familiar with the Nusantara vaccine procurement said that Terawan became familiar with the dendritic-cell method in the middle of last year. At that time, this method was brought forward by Taruna Ikrar, an expert staff Terawan knew from his days as director of the Gatot Soebroto Army Hospital. To Tempo, Taruna claimed he brought that method from Aivita Biomedical to Indonesia. “But it was Pak Terawan who was at the front, so the process was able to continue,” said Taruna at his office on March 3.

He further said that he knew Aivita Biomedical owner Hans S. Keirstand since 2004. In 2017 Taruna, who was living in the US state of California, joined Aivita Biomedical as a researcher. He studied into the use of dendritic cells, which prompt antibodies in humans, and can be used for cancer patients. When the coronavirus pandemic hit Indonesia in March 2020, Taruna was in the US discussing with Keirstand about possibilities of developing a Covid-19 vaccine with dendritic cells.

The dendritic system works differently from other corona vaccines developed by pharmaceuticals worldwide. This system takes blood from the patient’s body, and then separates dendritic cells from white blood cells. The dendritic cells are then introduced to the corona virus antigen, and incubated for three to seven days. After that, the cells are injected back into the human body.

Taruna said that Aivita is developing this method. However, in the beginning Aivita, set up in 2016, was hesitant to let Indonesia join in its research. “Later on, they became interested because of the halal (permissible by Islamic law) matter,” said Taruna, who has been head of the Physician Council since August last year. In a letter signed by Keirstand in July 2020, Taruna was appointed to manage the clinical investigations of Aivita Biomedical in Indonesia. He received the task of overseeing vaccine research, get investors for the project, and develop partnership programs for vaccination in Indonesia.

Ines Atmosukarto, molecular biologist of the John Curtin School of Medical Research and Australian National University in Canberra, has questioned the dendritic-cell approach in developing a Covid-19 vaccine. According to Ines, there is no proof yet during treatments that using dendritic cells in vaccines can prompt the production of antibodies. She also suggested that the Nusantara vaccine is expensive as it needs special laboratories.

A researcher familiar with the Nusantara vaccine process said that health ministry officials were not united in their support for the dendritic-cell method of the Covid-19 vaccine research. One issue that was asked about the most is the vaccine’s effectiveness, and the dearth of scientific explanations of the dendritic-cell approach. However, Terawan decided that research in this method would continue in Indonesia.

The researcher further said that since the technology was brought into Indonesia, Terawan has introduced it to President Joko Widodo and a number of cabinet ministers. Terawan, the researcher continued, has explained about this dendritic cell research of vaccines to Coordinating Minister for the Economy Airlangga Hartarto. Meanwhile, Taruna was summoned to meet Coordinating Minister for Maritime Affairs and Investment Luhut Binsar Pandjaitan. The researcher said that during that meeting, Luhut asked about the possibility of the Nusantara vaccine entering the list of local vaccines.

Taruna declined to comment extensively about his meeting with Luhut. “Clearly, the government fully supports the production of this domestic vaccine,” he said. Maritime Affairs Coordinating Ministry spokesperson Jodi Mahardi said Luhut always supports domestic products. However, he said he had no knowledge of the meeting between Luhut and Taruna. “I didn’t accompany (Luhut),” said Jodi.

Airlangga was not able to be contacted for comments, and has not answered questions from Tempo. Meanwhile, Presidential spokesperson Fadjroel Rachman said he has no knowledge of a meeting between the President and Terawan to discuss the Nusantara vaccine project. “I haven’t received any confirmation about that,” he said. 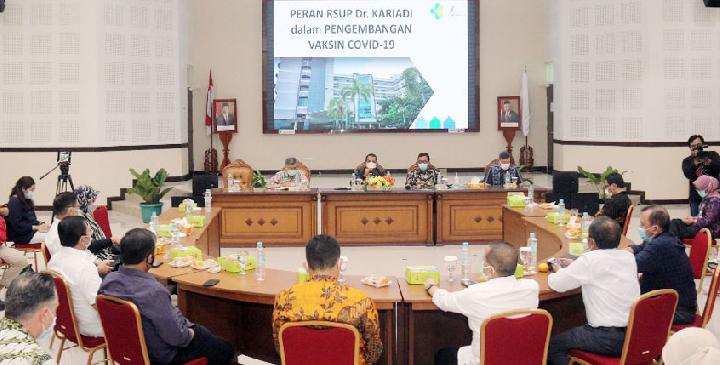 The working visit of DPR’s Commission IX to Dr. Kariadi Regional Hospital for a hearing on the phase 2 of clinical trials and the development of the Nusantara Vaccines. Dr. Kariadi Hospital Doc.

The vaccine development is not without any hurdles. Four officials who are familiar with this research said Terawan had been unhappy with the Health Ministry’s National Institute of Health Research and Development. This is because the latter did not immediately start with research on the Nusantara vaccine. This apparently led Terawan to reshuffle the department. However, Covid-19 spokesperson Siti Nadia Tarmizi denied these reports. “That didn’t happen,” she said.

Problems also occurred after Terawan issued two decrees on the research team overlooking the clinical tests on the dendritic-cell Sars-Cov-2 vaccine. The two regulations issued on November 15 and December 18 last year had the names of researchers from a number of universities and hospitals. Gadjah Mada University’s medical faculty in Yogyakarta was one of the institutions on the ministerial decree signed by Terawan on December 18, 2020.

Gadjah Mada University’s School of Medicine Dean for Public Health and Nursing, Ova Emilia, said she was surprised to see the name of her faculty and a number of lecturers on the team. “We already launched an official protest, because we have never been involved in any meetings or research,” she said. Ova further said that Terawan had contacted her prior to issuing the decree. At that time, Terawan asked for the names of researchers to support the government’s efforts to develop a vaccine. However, Ova continued, that request was not accompanied by an official letter or an explanation of what vaccine would be developed.

The Nusantara vaccine is now waiting for permission for its second phase of clinical studies by the BPOM. The plan is that some 180 volunteers would take part in the clinical study. Jarir At Thabari, Gadjah Mada University member of the National Committee of Drug Evaluators, asked that the Nusantara vaccine research should be done according to regulations prior to its public use. He also ask vaccine developers to explain of the goal of the research, whether it is to handle the pandemic or for public use. “The consideration is that the Nusantara vaccine uses the patient’s blood sample,” said Jarir, whose name was also put on the list of researchers on the decree signed by Terawan.