Forced Separation of the Research Institution


The PDI-P is pushing the National Research and Innovation Agency to become an autonomous institution. Megawati Soekarnoputri could potentially be appointed to chair its steering committee.

AFTER two and a half hours, the meeting between the Research and Technology Commission of the House of Representatives (DPR) and Research and Technology Minister/National Research and Innovation Agency Head Bambang Soemantri Brodjonegoro in the Parliament Complex, Senayan, Jakarta, on March 30, concluded with three recommendations. The Research Commission requested President Joko Widodo to take over National Research and Innovation Agency’s (BRIN) institutional matters. Politicians in Senayan also urged the President to reprimand the justice and human rights minister and the administrative and bureaucratic reform minister.

DPR Research Commission Chairman Sugeng Suparwoto said that the meeting was held because the fates of the research ministry and BRIN had been left uncertain for a year. Justice Minister Yasonna Hamonangan Laoly had not legislated the presidential decree on the formation of BRIN, although it was already signed by Jokowi in March 2020. Meanwhile, Administrative Minister Tjahjo Kumolo did not immediately decide on BRIN’s institutional structure. “We wanted to resolve this issue soon by inviting the related parties,” said Sugeng when contacted on Tuesday, April 13.

President Jokowi sent a letter to DPR Speaker Puan Maharani on the same day of the meeting at the Research Commission. The letter, No. R-14/Pres/03/2021, explained that part of the research ministry’s duties and functions would be carried out by BRIN. Jokowi also merged the research ministry with the education and culture ministry.

The idea to separate the research ministry and BRIN also surfaced in the meeting. Research Commission Deputy Chair Bambang Wuryanto said that he once suggested Minister Bambang Brodjonegoro to separate BRIN as an autonomous institution. The Indonesian Democratic Party of Struggle (PDI-P) politician also claimed that he proposed the idea when meeting President Jokowi in late March.

According to Bambang, the President requested the details of BRIN’s institutional matters to be discussed with State Secretary Pratikno. Bambang then met Pratikno and said the discussion was tough. Bambang initially thought he could take office as both research minister and head of BRIN. “It turned out it was in conflict with Article 23 of the State Ministry Law,” he said. The article states that ministers are prohibited from having concurrent positions in two or more state institutions or companies.

Bambang explained that the meeting discussed the chances of transferring the duties and functions of the research ministry to the higher education directorate-general of the education ministry. The meeting agreed that there are changes that need to be consulted with the DPR. Pratikno will also discuss the matter with the President, while Bambang promised to oversee the consultation process in Senayan.

Signs of separation between the research ministry and BRIN have been seen early on since the Indonesia Onward Cabinet was inaugurated. About two weeks after his inauguration as research minister, Bambang Brodjonegoro met PDI-P Chairperson Megawati Soekarnoputri in Menteng, Central Jakarta. In that meeting, Megawati explained the concept from her father who was also the first president, Sukarno, who formed the Indonesian Council of Sciences. The option to establish a board of advisors within BRIN was also mentioned in the discussion. 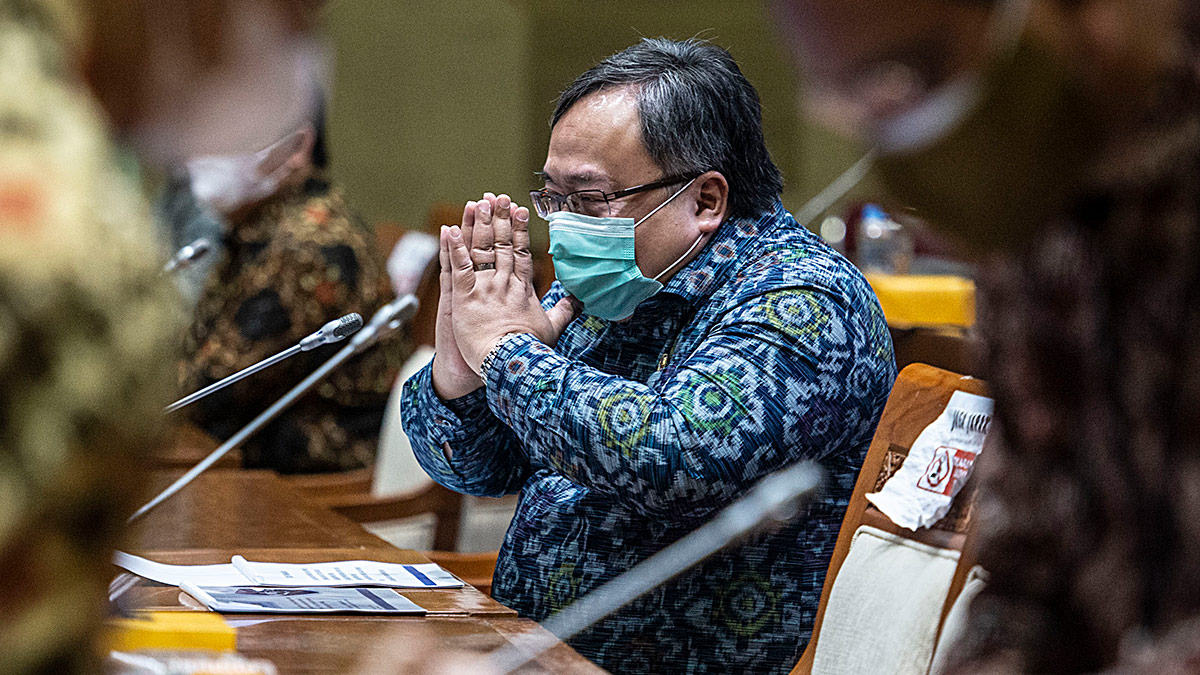 The meeting in Megawati’s residence was continued by another meeting between Minister Bambang and Minister Tjahjo Kumolo. They engaged in a tough discussion because Tjahjo supposedly wanted a steering committee to be established within the structure, while Bambang said a steering committee could not be formed because that would require the ministerial nomenclature to be changed and the cabinet to be rearranged.

During an interview with Tempo in February, Bambang said that the meeting at Megawati’s residence did not make any deal whatsoever, including anything about BRIN’s steering committee. He said he was designing the organizational structure when he met Megawati. After BRIN was established as an autonomous institution, Bambang said that he supports the President’s decision. “I am ready to provide input so that the merger will be smooth and positive,” he said to Tempo.

PDI-P Secretary-General Hasto Kristiyanto said Megawati’s idea that Indonesia should have a research and innovation agency had been proposed since Joko Widodo was appointed as a presidential candidate in 2014. BRIN is claimed to be able to help achieve national self-reliance. “BRIN is very important to build our spirit through mastery of science and technology,” said Hasto. As for Megawati’s chances of becoming the steering committee head of BRIN, Ministers Yasonna Laoly and Tjahjo Kumolo did not respond to Tempo’s request for confirmation until Saturday, April 17.

Two sources who are familiar with the formation of BRIN said the institution would be in charge of around 12 deputies. This rather fat organizational structure is the consequence from the restructuring of government research agencies, such as the Indonesian Institute of Sciences (LIPI), the Agency for the Assessment and Application of Technology (BPPT), and the National Nuclear Energy Agency (BATAN), which will reside under BRIN. The same sources mentioned that LIPI Chairman Laksana Tri Handoko could potentially be appointed to head BRIN.

Handoko, who holds a doctorate degree in physics, once provided feedback to the research ministry on the transition of research institutions under BRIN. He is also said to frequently discuss matters of research and innovation with Megawati. Handoko himself said the suggestion that he would become head of BRIN is just a rumor. He also dismissed the notion that he was close to Megawati. “LIPI is ready to follow the President’s decision,” said Handoko.