Dozens of structures, shops, and illegal stalls are mushrooming on the shores of Youtefa Bay in Jayapura, Papua, which is a protected forest zone. Mangrove forests are cut, land is filled and zoned. A number of Papuan officials are allegedly the owners of structures on the Holtekamp Beach area. The rowing venue construction project for the National Sports Week (PON), to be held next year, is believed to not have a permit. The environmental damage is increasingly threatening the sustainability of the waters and mangrove forests’ ecosystem, and the lives of the community on the shores of Youtefa Bay. This report is written in cooperation of Tempo magazine, Tempo Institute, and Jubi.co.id.

BANNERS flutter in front of a site by the intersection of Abepura-Keerom road near the Holtekamp Beach in Jayapura, Papua, in the middle of August. On the site is what seems like an unfinished bungalow, but already equipped with electricity. Its walls are adorned with birds of paradise images, and the roof is green. Across from the building are rows of traders’ stalls.

That structure and the site, measuring about a hectare, is closed to the public. A guard said the building is owned by Papua Deputy Governor Klemen Tinal. “It’s a personal property,” the guard said. Origenes Meraudje, village head of Enggros in the Abepura District, confirmed that the bungalow on Holtekamp beach, which is near his village, is owned by Klemen Tinal. “That location used to be a sago and coconut village,” Meraudje said on Thursday, August 20.

Klemen Tinal declined to answer when asked about the status of his building on the site by Holtekamp Beach. He swiftly walked past when door-stopped on the 75th celebration of Indonesia’s independence at Sasana Krida, Jayapura, on August 17. “What construction?” Klemen retorted while walking towards the first floor of the Papua gubernatorial office to follow the live broadcast of the independence ceremony from Jakarta.

A week after the independence celebration, a large party was held at the bungalow. Billboards with congratulatory wishes for Klemen’s 50th birthday were displayed in front of the building. People overflowed the roads by Holtekamp Beach to enjoy the party. There was a photo of Klemen next to Papua Governor Lukas Enembe and acting Regional Secretary M. Ridwan Rumasukun. The guests filled the site on and around the bungalow, entertained by singing and traditional dances by the Saireri Bhayangkara I Jayapura Art Studio

Vendors also enjoyed a windfall. On the roadside, there were at least 100 shops. One of them said traders there were moved from the main road of Abepura-Keerom. They pay monthly rent of Rp500,000, but have to build their own stalls. “The mayor allows construction here, as long as it is not near electricity poles and the road,” she said. 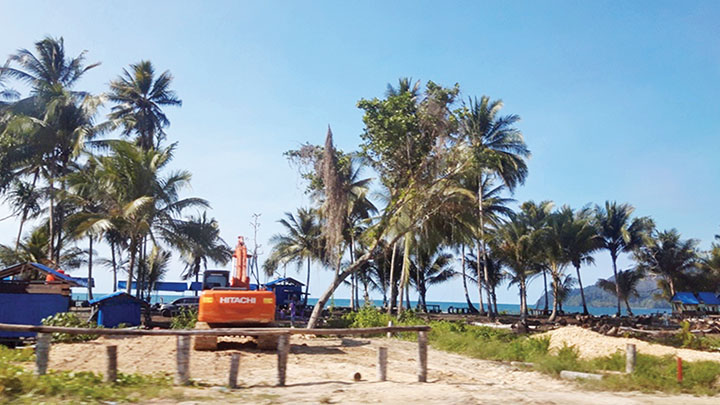 The increased accessibility of the Hamadi-Holtekamp route crossing the Youtefa Bay protected forest location worsened land encroachment in that area. Some of the land has already been plotted by piling it with corals. One of those plots has a sign saying “The GBDP Church of Jayapura’s Holtekamp Beach Marguni Congregation will be Built Here.”

Allegedly, some Papuan officials own buildings on the protected forest area. Some 100 meters from the bungalow believed to be owned by Kliman Tinal stands a concrete building flanked by two wooden structures. There are no signs with information on the project. In front, there was only a sign saying “88.” The surrounding community said the plot is owned by the family of Governor Lukas Enembe. An official at Jayapura City’s National Land Agency (BPN) also said that Lukas’ relative also has a building. Until Friday, October 2, Lukas has been unavailable for comments due to illness.

Yohana Yembise, former women and children empowerment minister, is also said to own a plot in the protected forest zone. However, she was also unable to clarify that matter. “She is ill,” one of her relatives said at her residence on Friday afternoon, August 16. Until last week Yohana, who is also a Cendrawasih University lecturer, could not be contacted.

Field research has shown that Youtefa Bay’s protected forest area has been compromised and is filled with construction. Three out of the four global positioning system coordinates for buildings and shops on the Youtefa Bay shores, confirmed by the Jayapura’s Region X of the Forest Zone Stabilization Unit, are also in the protected forest zone. This includes the structures said to be owned by Klemen Tinal and the Lukas Enembe family.

According to Chief of Facilities and Infrastructure Division at Jayapura City Planning Office, Dolfina Jece Mano, the eastern part of the Muara Tami District continues to be developed, including the Youtefa Bridge inaugurated by President Joko Widodo on October 28 last year.

Dolfina also said that the bridge’s construction was in line with the environmental impact study. Recently, land and forest clearance and physical construction have intensified. “It is designated as a protected area, and yet the situation on the ground has changed,” she said on July 28.

In order to start building, the public must request for a permit to the village head all the way up to the regional administration. Large-scale projects must even ask permission to the ministry of public works and housing. A recommendation can only be issued if construction plans are in line with the region’s spatial planning. “If that is not so, we will reject it. However, in the field it doesn’t appear to be so,” Dolfina added.

She admitted that there are obstacles in the permit issuance because there are parties who are already doing construction. They only make agreements with communal elders prior to requesting for a permit to the regional government. According to her, buildings and shops on the Youtefa Bay shore violate regulations. “The problem is that the word on the ground says that a certificate has already been obtained.”

Another problem arose at Youtefa Bay from the construction of the 2021 PON rowing venue. This venue is located some 300 meters from the Youtefa Bridge. Since early July, this rowing venue project extending two kilometers has already been completed. Workers, trucks, and excavators have been deployed to carry rocks and corals to fill the ocean and mangrove forests. Sago, pine, pandan, and mangrove trees on both sides of the road have been cut and covered by corals. The rowing lane will also be dug out up to three meters deep. That location will also be complemented with a beach safety support made out of steel and concrete.

This rowing venue construction has sparked public outcry. In early July, Enggros village residents closed the project’s location and demanded compensation for their land. Chief of Papua’s Youth and Sports Office, Alex Kapisa, said that there is no land compensation as the covered area is part of the ocean. He said that the Papua provincial government only rents the location. “We don’t buy the land. We only rent it for the duration of the preparation until the realization of PON,” he said.

Ketty Kailola, Jayapura City’s head of the environment and cleanliness office, said that the rowing venue and buildings located along Holtekamp Beach are included in the protected forest area. No construction should be allowed there. “Construction is prohibited in this area, and no environmental impact analysis has been made,” Kailola said.

John Kalor, Cendrawasih University’s fisheries and ocean researcher and lecturer, said that digging will make the ocean murky and influence the water’s oxygen level. This, in turn, will have an impact on oxygen supply for fisheries and ocean biota. Part of the coral reef is also threatened with destruction and elimination. “Moreover, the Youtefa Bay is extensive, and has an impact on the fish reproduction process,” he said.

Nimbrot Rumaropen, head of the Papua river region division, said that the rowing venue had been planned on three locations: Sentani, Jayapura Regency, and Youtefa Bay. Finally, the project was centered at Youtefa Bay, in line with the Presidential Instruction No. 1/2020 on PON XX acceleration support in Papua. Rumaropen further said that the people’s interest will be kept in mind during the construction period. “We ask for people’s support to make PON a success,” Rumaropen said.

Edward Sembiring, chief of the Papua Natural Resources Conservation Center (BKSDA), said that the mangrove field reaching until 500 meters from the road is included in the protected forest area, and is under the jurisdiction of the forestry office. The BKSDA, Sembiring continued, is responsible for the eco-tourism park and ocean area. The Youtefa Eco Tourism Park consists of a special block with an area of 38.6 hectares, utilization block (1,391 hectares), protective block (294 hectares), religious block (5.63 hectares), and traditional block (78.61 hectares).

Villages such as Engross, Tobati, and Nafri are in the special block. The utilization block is used for tourism, while the traditional block includes the mangrove area, which is known as the Female Forest by the Enggros and Tobati community. “There are cooperation agreements in the interest of construction,” Sembiring said. “It becomes a problem when there is buying-and-selling involved.” 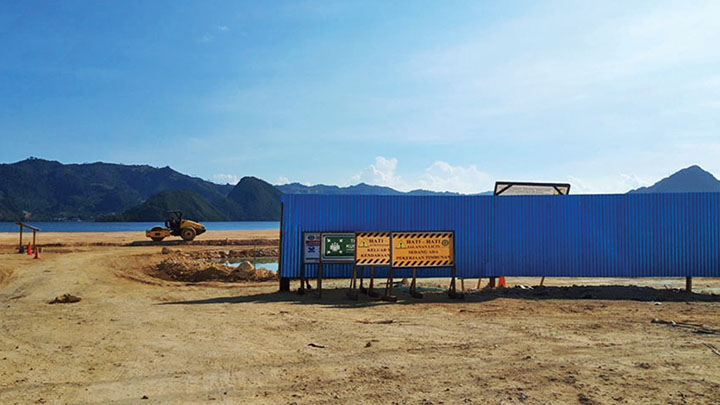 Development of a 2021 National Sports Week venue in the protected forest inside Youtefa Bay, Jayapura, Papua, in July./Jubi/Tempo/Engel Wally

Rory Cony Huwae, head of Jayapura City’s regional planning and construction office, did not deny news of the cutting of mangrove, sago and pandan trees, and the land filling with corals in protective forest areas. He even pointed out that the rowing venue construction was not in line with procedures. “What about AMDAL (environmental impact analysis)? This was done just like that. When we checked, we did a postponement. This is a national program. It is time that we revise the spatial planning based on this development,” Huwae said.

He added that construction in areas between the Youtefa Bridge until the Holtekamp Beach road intersection has also violated regulations. The reson being, that area is clearly marked as a protected forest region. “That area is solely a protected area, and for water absorption,” he said on July 28.

Buildings along Holtekamp road until the Youtefa Bridge have been constructed without permits. Yohanis Wemben, Jayapura City’s department head for integrated investment and permits, said the buildings have violated beach and road regulations. The area for the PON 2021 rowing venue project does not even have a building permit. “We will regulate them,” he said.

Papua’s BPN confirmed that buildings on protected forest area, including the rowing venue, do not have certificates. The institution could only issue certificates if the applicant has a recommendation from the forestry department and the public works and housing ministry. BPN officials will surely re-check the applicants’ locations. “If they are in protective forests or urban forests, we cannot issue certificates,” said Emanuel Guntur Waromi from Papua BPN’s location measurement and survey division.

Pusaka Foundation Director Frangky Samparante believes there is a conspiracy among regional officials, which has resulted in the intensified encroachment and construction on Youtefa Bay’s protective forest area. “It’s violating forestry and environmental laws, particularly (development in) protective forests, requires permission from ministers and parliament,” he said.