Reconnecting with the Earth


Sumarni Laman is motivating Dayak youths to return to their tradition of preserving the forest. She made it to the list of 16 Women Restoring the Earth by the Global Landscapes Forum.

THE Asian woman’s portrait is displayed on the Global Landscapes Forum website, along with 15 other women from various nations. Sumarni Laman from Central Kalimantan became the only Indonesian woman chosen to join the ranks of Women Restoring the Earth. The international forum, which focuses on Sustainable Development Goals and the Paris Agreement on climate change, announced the 16 names in March. “I represent the youth movement in Kalimantan, showing that we do not sit idly by while deforestation is occurring to our forest,” said Sumarni on Saturday, March 27.

Sue, as Sumarni is often called, is a staff member of the Ranu Welum Foundation. Founded by Emmanuela Shhinta—one of the figures selected by Tempo as Guardians of the Earth in 2020—this foundation is focusing on the empowerment of Dayak youth so that they will continue their tradition and learn to protect the environment. Sue has been working as Youth Act coordinator in the foundation since 2019. She is motivating youths, particularly those from Dayak tribes, to return to their tradition of preserving the forest.

Dayak, Kalimantan, and the forest are inseparable. The island of Borneo is home to the third largest tropical rain forest remaining on the planet. The people of Dayak live off the forest around them by gathering their daily needs from it, like a supermarket. They harvest fruits, plant vegetables, hunt wild game, collect wood for use in constructions, and take roots or tree barks as traditional medicine.

Their elders live alongside the forest and preserve it. However, fire, logging, and use of land as plantation are slowly eroding the forest area. “The youths, particularly those who live in the city, are no longer connected to the forest. Just like me, who only returned after 20 years,” said 24-year-old Sue. 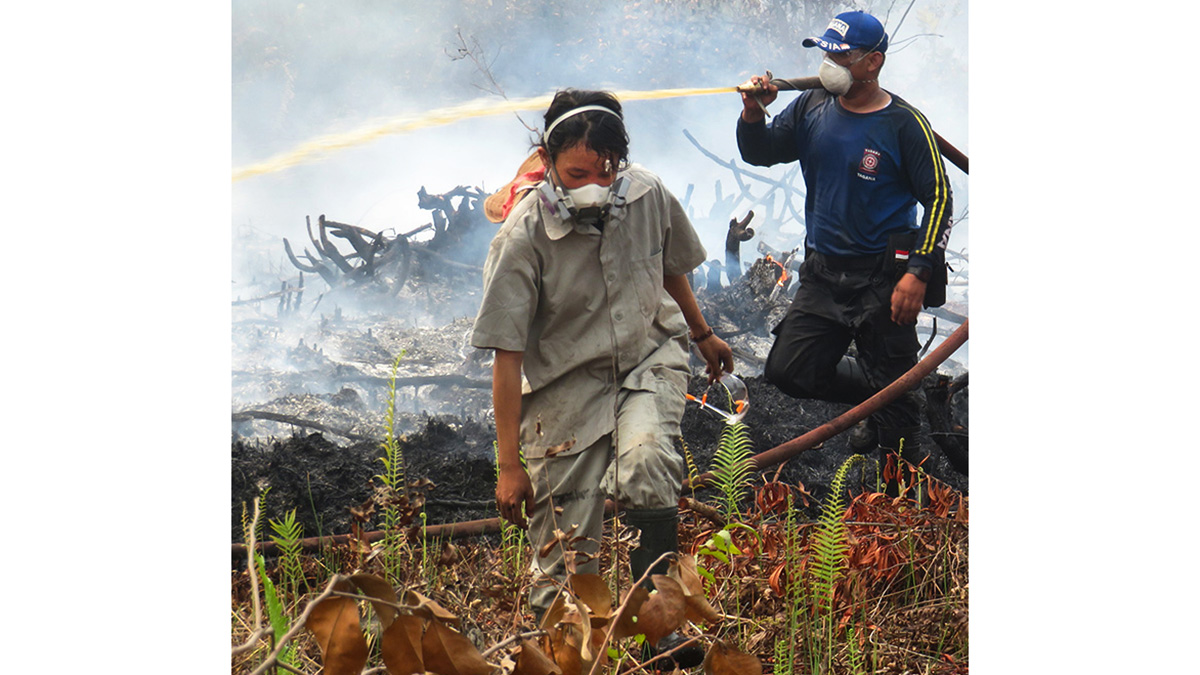 Sumarni Laman and a member of the Katuyung Firefighter squad putting out fire on a peatland in Palangkaraya, Central Kalimantan, in 2019. Private Doc.

Sue was born and raised in Kampuri village, Gunung Mas Regency, Central Kalimantan. Together with the other kids from the village, she used to play in the forest in their backyard. They went down to the river, using only their bare hands to catch snakehead fish the size of their thigh. They gather mushrooms that grew between the big trees after rainfall, and saw Bornean white-bearded gibbons when rowing their boats. She also listened to the elder’s stories about living in harmony with nature. “That was the luxury I experienced during childhood,” she said.

When Sue was 4 years old, her family moved to Palangka Raya City, some 125 kilometers away from her home village. For the first two years, Sue and her family still went back and forth to the village. However, when she was 6 years old, they stopped going to the village. Sue could no longer play in the forest and was disconnected from nature.

It was in Palangka Raya that Sue witnessed a forest fire for the first time. Billowing smokes from the burning peatlands around it enveloped the city. Her parents and neighbors were busy digging trenches and filling them with water to keep fire from spreading into the residential areas. “I have been suffering from asthma ever since, maybe because of the frequent forest fire,” she said.

She only returned to her village during a field study for her chemistry education program at Palangka Raya University. That time, the forest of her childhood that used to teem with wildlife was already gone. What remained were mining holes, and barren lands victim of fire or deforestation.

Sue was upset by the situation, confounded by the various studies and claims portraying the indigenous people as perpetrator responsible for the destruction. They were accused of damaging the forest by burning down plants to create fields for farming. “But nobody studies the problem from the perspective of the indigenous people,” she said. She wanted to help put out the fire when the forest was burning, but she did not know where to go.

Her concern led her into enlisting as volunteer during the International Day of the World’s Indigenous Peoples celebration held by Ranu Welum in 2017. She then joined as a staff member of the foundation. Shinta, who keeps a close eye on her colleagues in the organization, sees Sue as a smart, nimble, and hardworking person. “I call her the speedy girl because she gets her work and tasks done very quickly,” said Shinta.

She also saw the change in Sue. Sue transformed from a volunteer into a young Dayak leader willing to keep learning in order to bring change to her community. Sue was then appointed as coordinator of the Youth Act in 2019.

Not long after, a major forest fire broke out in Kalimantan. Together with her friends from the Emergency Alert Team, Sue fought the fire on the outskirts of Palangka Raya City and Pulang Pisau Regency. Their fight did not go well despite the government having provided deep wells in numerous locations that are prone to fire. “It turned out that the deep wells in the area were fake. Only the structure above ground was present, with no hose underground. We could not get water,” she said.

They had to come to other wells some distance away, spending most of their time taking water instead of fighting the fire. “Corruption hurts,” said Sue. Sue and her team also served the people by visiting villages that lack community health centers. They distributed facemasks and educate locals on the danger of smoke from fire.

Under Sue’s leadership, the Youth Act brought the Heartland Project, a program to increase awareness among the youths on the issues of forest fire, mining, and violation of indigenous people’s rights. Among other means, they organized an environmentally friendly tour to Tumbang Nusa village in Pulang Pisau Regency, involving students from Palangka Raya. Tumbang Nusa has peatlands and it has also been subject to forest fires during the last 23 years. These youths were invited to plant trees, given explanation on the peatlands ecosystem, and engaged in a discussion to formulate forest restoration strategies. 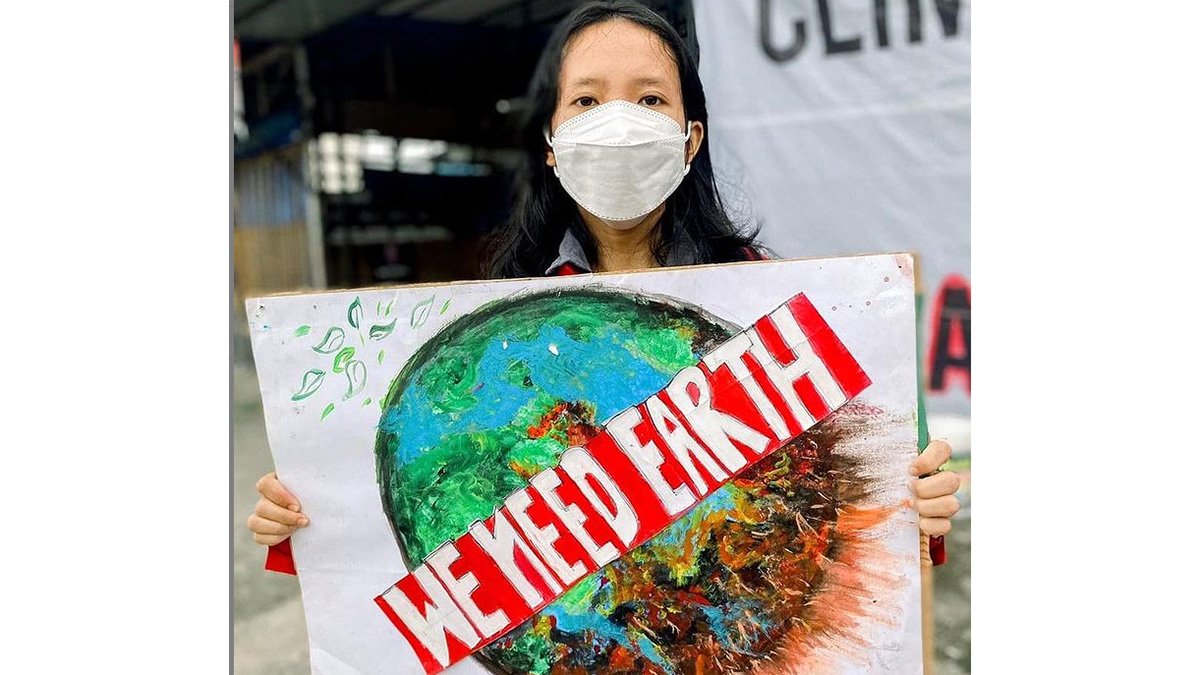 They also have another program that invites youths to spend some time with the Dayak community in Talekoi village, South Barito Regency. Talekoi village is one of the oldest Dayak settlements in Central Kalimantan. The youths could learn about the Dayak life system, take part in discussions, and listen to tales from the elders. “We select young people with leadership potential so that they will be able to spread the knowledge to others,” said Sue.

Peresto, a resident of Talekoi village, said that Sue and her friends changed the people’s way of thinking as well. Villagers were given explanation on the dangers of deforestation. “Now somebody who wants to cut down a tree will think twice,” he said. Youths in the village, who were seemingly not productive before, were also taken in to join the community’s activities.

Sue and her friends also sought information about local customs, and tapped into the forest’s potential. For example, they initiated the Bornean ironwood tree (Eusideroxylon zwageri) nursery, a type of plant that is becoming increasingly rare in Indonesia. The ironwood is still found in Talekoi’s forest. “So, now we have work to do,” said Peresto.

Aside from her activities in the Youth Act, Sue is currently undergoing a graduate program on public policy analysis at the School of Government and Public Policy-Indonesia. She has been seeing that people only become the object of policies, although they are actually the most important component of development. When the government banned the slash-and-burn agriculture, the people were not given alternatives. Nor did they receive assistance in keeping their livelihood. “I want people to become an important part of the policy.”