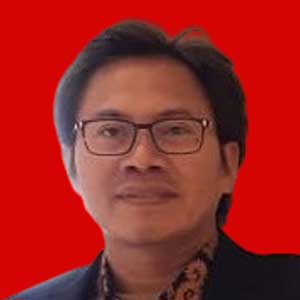 Abdul Manan covers international issues and has received various accolades including the 2009 Press Council-UNESCO journalistic award on the freedom of the press, Anugerah Swara Sarasvati Award 2010, and attended the Kassel Summer School 2010 in Germany.

Manan graduated from Stikosa-AWS Surabaya and is the chairperson of the Indonesian Independent Journalist Alliance 2017-2020.

Detention camps and forced labor sites for political prisoners of 1965 can be found in a number of regions. Most of these camps are nearly unknown today. There is a push to create a memorial.

We Are Enforcers of the Law

The Justice and Human Rights Ministry explains its reason for granting remission and parole to corruption convicts.

I Will Never Give Up, Until the Day I Die

Why did Suciwati feel she was let down by President Joko Widodo when he promised to resolve the murder case of Munir?

What does Indonesian Employers Association Chair Hariyadi Sukamdani say about the effects of the fuel price hikes on service and commodity prices as well as minimum wages?

No Special Privilege for Sambo’s Children

Is it true that Putri Candrawathi has not been detained because she still has to care for her (underage) child? KPAI  answers.

Officer E Worries that He Would be Killed

We Opposed the Opening Peatlands for Farming

Hartono, Chief of Peatland and Mangrove Restoration Agency, explains peatland and mangrove restoration efforts and their complex challenges. The agency does not support peatland being used for the food estate project.

We Haven’t Raised the White Flag Yet

General Elections Supervisory Agency Chair Rahmat Bagja explains the 2024 election monitoring process which began in August. He raises his concerns about hate speech during the campaign period and the complexity of tackling money politics.

No Intervention, No Secret Orders

Ade Firmansyah Sugiharto heads the second team investigating the cause of death and signs of other wounds on the body of Brig. Yosua. A challenging task, as the corpse’s organs have already been displaced at the previous autopsy.

Fear is a Universal Emotion

Filmmaker Joko Anwar predicts the Indonesian film industry to rebound to even higher levels than in 2019. The director of Pengabdi Setan 2: Communion (2022) gives some insight into why horror movies sell well around the world and in Indonesia. What is the secret?

The Energy Transition Needs At Least US$1 Trillion

Energy and Mineral Resources Minister Arifin Tasrif explains the energy transition program aimed at achieving net zero emissions set out by the Paris Agreement. Indonesia will need at least US$1 trillion for the transition.

I Don’t Want to Speculate

Attorney General Sanitiar Burhanuddin explains the progress of the investigation into suspected corruption, allegedly involving former Trade Minister Muhammad Lutfi, that caused the cooking oil scarcity. On the Paniai gross human rights violation, he dismisses rumors that there are lobbies to settle the case.

There Must Not Be Anyone Too Powerful in Garuda

Garuda Indonesia CEO Irfan Setiaputra explains the various efforts taken to save the national flag carrier after signing the debt postponement. A change in corporate culture is needed to prevent the recurrence of corruption and scandals.

We Owe a Debt of Gratitude to Our Migrant Workers

Coalition of Sovereign Migrant Workers has the data of 149 Indonesian workers suspected to have died from inhumane treatment they received at a Sabah immigration detention center in Malaysia. How is BP2MI Chief Benny Rhamdani handling this case? Did this tragedy really happen? Benny also talks about his efforts to combat illegal migrant worker placement syndicates and loan sharks.

PDHI Chief Muhammad Munawaroh says that the FMD outbreak results from the state’s lack of oversight over livestock traffic. The veterinarian association recommends the establishment of an animal health agency.

The Ombudsman receives a litany of reports about conflicts over land, civil servant recruitment, and now the appointments of acting regional heads. The agency calls for budget cuts as a sanction for the regions in the red zone for failing to meet the public service compliance standards.

We All Know That There Will Be Another Pandemic

Professor of Medicine of the University of Indonesia Tjandra Yoga Aditama says that the Covid-19 pandemic is not over yet. The next pandemic may be just around the corner.

Sooner or later Ukraine will Take Back Its Land

National Commission on Human Rights Chief Ahmad Taufan says that the fulfillment of human rights in the past five years has not been encouraging.

The Press Council Must Act as Government’s Critical Partner

Azyumardi Azra is the new chair of the Press Council with the mission to revitalize the agency to become a critical partner of the government. He discusses the role of political and business oligarchs behind the democratic decline.

Social Polarization Will Not Be As Severe As In Previous Elections

We Should Brace Ourselves for High Oil Prices

Upstream Oil and Gas Special Regulatory Task Force Chairman Dwi Soetjipto says that the war in Ukraine has sent fuel prices to soar as Indonesia still depends on oil imports. However, on the upstream side, the crisis spurs more investments for exploration.

Terrorists Have a Desire to Be Recognized

National Counter-Terrorism Agency Chief Boy Rafli Amar explains the security risk posed by the terrorist networks that he was monitoring, from the Islamic State of Indonesia to Jemaah Islamiyah.

Decisive Battle in the Eastern Zone

The Russia-Ukraine war has shifted to Luhansk and Donetsk since last April. This battle in Donbas will decide the outcome of the Russian invasion.

I’m Just a Mouthpiece of Ulemas

Habib Husein Ja’far Al Hadar uses slang and wears outfits that appeal to youths when giving sermons. He has thousands of followers on social media and his content attracts millions of viewers.

I Will Nurture Even the Smallest Ray of Hope

Aksi Kamisan, a weekly rally staged in front of the Presidential Palace, has entered its 15th year. Kamisan activist, Maria Katarina Sumarsih, talks about her fight for the cause.

It’s Dangerous for Village Heads to Engage in Practical Politics

Indonesian Village Administration Association Chair Arifin Abdul Majid expresses his concern about a village association national gathering during which the much-debated presidential term extension was promoted. He warns against the dangers of village officials getting involved in politics.

Our Soldiers Didn’t Do It

Russian Ambassador to Indonesia Lyudmila Vorobieva gives Russia’s side of the story regarding the massacre in Bucha, the missile that demolished Kramatorsk and the destruction of Ukraine’s civilian infrastructure.

Marcus Mietzner, an associate professor in Indonesian Studies at the Australian National University, sees the proposed delayed elections and presidential term extension as democratic setbacks. He attributes President’s lack of firmness to the unabated rumors.

National Food Agency Chief Arief Prasetyo Adi explains the scarcity of some food items, such as cooking oil, and the supply management for food resilience. What is anticipated for food necessities during and at the end of Ramadan?

IKN Chief Bambang Susantono and his deputy Dhony Rahajoe talk about the IKN project’s priorities for the next two years. What are the strategies to attract investors?

The government and communities are trying to mitigate the direct impacts of climate change. This includes planting mangrove and coffee to absorb water in the upstream areas.

National Resilience Institute Governor Andi Widjajanto talks about the results of the LAB 45’s research on extension of the presidential term, vulnerabilities of the new capital, and democratic regression in Indonesia.

We Need to Break Down this Patriarchal Wall

Interviews with Ukrainian and Russian Ambassadors to Indonesia

Russian Ambassador to Indonesia, Lyudmila Vorobieva, claims that the assault on Ukraine is carried out to prevent the country from being used as a weapon to attack Russia.

Meanwhile, Ukrainian Ambassador to Indonesia, Vasyl Hamianin points out that it is wrong for Russia to use such fear as an excuse to invade Ukraine and kill civilians in the process.

We Never Promise There Won’t Be Any Problems

The Indonesian Ulema Council’s (MUI) Deputy Chair Anwar Abbas explains steps his organization has taken after its board members were arrested on terrorism charges. He also criticizes rising economic and landownership disparities under the Jokowi administration.

Adequate Facilities Are Ready If the Covid-19 Cases Peak Occurs