A Decision on Emergency Vaccine Use - Cover Story - magz.tempo.co

A Decision on Emergency Vaccine Use


Officials of the Indonesia Ulama Council (MUI) were not unanimous in their religious fatwa (ruling) on the permissibility of the measles-rubella vaccine. Some of them did not agree that the injection be allowed.

A hearing of the MUI’s Fatwa Commission held on the third Monday of last August was not going smoothly. Some of its participants questioned the side effects of the measles-rubella (MR) vaccine. They were there to decide if the injection was allowable on religious grounds according to juristic reasoning.

Vice Secretary of MUI’s Fatwa Commission, Abdurrahman Dahlan, for instance, was concerned that the vaccine could result in some deaths. According to Abdurrahman, he raised this possibility in the context of taking sufficient precaution in making the decision on this religious ruling. “Everything needs to be tested, including the ingredients used in the vaccine,” he said on Thursday last week.

Attended by 45 of the 60 members of the Fatwa Commission, this meeting was convened upon the request of the Health Ministry. The second stage of the government’s MR vaccination program was far below target. Of the 32 million children targeted, at that point only 42.98 percent had been given the vaccine.

Realizing that the success of the vaccination program was connected to the MUI’s fatwa, Anung Sugihantono, the Director-General for the Prevention and Control of Disease of the Ministry of Health, wrote to the MUI on August 6. The ministry asked the MUI to change its haram ruling to mubah (permissible). In this way, the MR vaccine could be used on the basis of emergency conditions, as replacement vaccines were unavailable. This hearing was held last August 18.

In this Fatwa Commission hearing, Abdurrahman’s doubts subsided after Aminuddin Yakub, also a member of the Fatwa Commission, and some other participants, presented data from the National Committee on the Study and Prevention of Post-Immunization Adverse Reactions (Komnas PP KIPI) and the Indonesian Pediatricians Association (IDAI). Those two institutions had been invited to the MUI office three days before the hearing. According to Aminuddin Yakub, the MUI wanted to review supporting data when making their decision.

The Komnas PP KIPI, said Yakub, in their study, stated that any risk of death after being immunized, which has been circulating on social media as of late, is not directly connected to the vaccine. “Those deaths were coincidental,” said Komnas PP KIPI Chairman Hindra Irawan Satari, when asked for confirmation regarding the data his institution presented at the MUI’s Fatwa Commission hearing.

On the contrary, if the measles vaccine is not given, children’s lives would be in danger. “If the rubella virus attacks a pregnant woman, there is the potential that the fetus will have birth defects as well as heart and growth problems,” said IDAI Chairman Aman Bhakti Pulungan.

Abdurrahman Dahlan was not the only person who raised the issue of vaccine ingredients during the hearing. Fatwa Commission Chairman Hasanuddin held that something which comes from a haram substance may only be used under emergency conditions. The MR vaccine, said Hasanuddin, is haram because it used ingredients sources from pigs in its manufacture.

Fatwa Commission Secretary Asrorun Ni’am Sholeh disagreed with Hasanuddin. Ni’am held that the vaccine was not lidzatihi or something which is inherently haram due to the nature of it. “According to Pak Ni’am, the pig element in that vaccine is not from its meat. It was just some cells. In his opinion, cells are not lidzatihi. In my opinion, those cells were from pigs, so the material is haram,” said Hasanuddin. 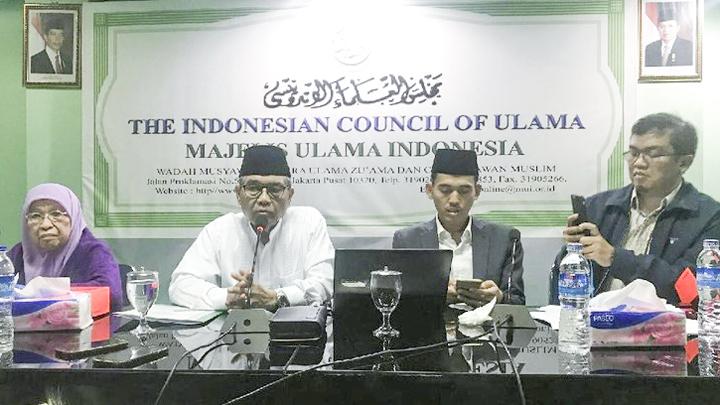 Ni’am did not deny having a difference of opinion with Hasanuddin. In his opinion, it is normal to have such differences during discussions. Even if there is a debate, said Ni’am, the fatwa is made based on mutual consultation. The MUI has even supported vaccination in all provinces. “We have even helped the Health Ministry disseminate the mubah fatwa,” he said.

After a three-hour hearing, which lasted  until 10:30pm, the Fatwa Commission finally decided that the use of the MR vaccine was religiously allowable. According to Hasanuddin, this fatwa was made because no halal (allowable) vaccines for measles and rubella are currently available. It is mentioned in MUI Fatwa No. 33/2018 dated August 20, that the vaccine can only be used due to emergency conditions.

As it so happened, the debate continued after the decision was made. A few days after the mubah fatwa was made, MUI Deputy Secretary-General Tengku Zulkarnain said that the MUI held a meeting about it, which was attended by the institution’s leaders. During that meeting, Zulkarnain insisted that he did not agree to the use of the MR vaccine. He said that this time the public does not need to be administered the MR vaccine. “My children have not been injected with it and they are just fine. I already have grandchildren,” he said.

Zulkarnain asked those present at this meeting to consider post-injection adverse reactions. He presented data which he obtained from the Halal Corner, an institution which follows products with the halal label. Halal Corner asked the MUI to revise the mubah fatwa on the use that vaccine. “They brought data that some people died after being injected with this vaccine,” said Zulkarnain.

Aishah Maharani, founder of Halal Corner, verified the information about her meeting with Tengku Zulkarnain. She insists that the mubah fatwa should be amended.

MUI Deputy Secretary-General Salahuddin Al-Ayyubi said that a debate continued among MUI officials after the fatwa was made. Even so, this does not change the August 20 fatwa. It can only be changed after a halal MR vaccine is available. “There is a good intention behind the mubah fatwa,” said Salahuddin. “Building a healthy generation is a joint responsibility.”