CARRYING a cellular phone, a laptop, and a stack of documents, Richard Joost Lino came to the Attorney General’s Office (AGO) in Jakarta in mid-November last year. The former chief executive officer (CEO) of Pelabuhan Indonesia (Pelindo) II from 2009-2015 was summoned for a questioning in connection with a case of suspected corruption involving a contract extension for management of the Jakarta International Container Terminal (JICT) at Tanjung Priok Port in Jakarta. “They asked for (those items), so I gave them,” said Lino on Tuesday, February 9.

Lino is hoping that investigators will be able to determine his level of involvement in the case through the content of his electronic devices. “So that they can check it themselves. If I indeed received money, there will surely be a data trail,” said Lino.

Investigators at the office of the Deputy Attorney General for Special Crimes began looking into this case in September 2020. It was to follow up a recommendation from a Right of Inquiry Committee in the House of Representatives (DPR) regarding Pelindo II in 2017.

Based on the investigation of that DPR special committee, the extension of the cooperation agreement for the management and operation of the JICT—one of the shipping container terminals in Tanjung Priok, which had previously been jointly managed by Pelindo II and Hong Kong-headquartered Hutchison Ports Indonesia—was suspected of being not in accordance with the regulations, and resulted in financial losses to the state. This special committee requested the Supreme Audit Agency (BPK) to conduct an investigative audit.

According to the findings, there were indications of Rp4.08 trillion in state losses resulting from the cooperation contract for the management of the JICT. The indication of such losses came from the difference in the amount of leasing down payments which should have been received by Pelindo II from Hutchison Ports Indonesia. 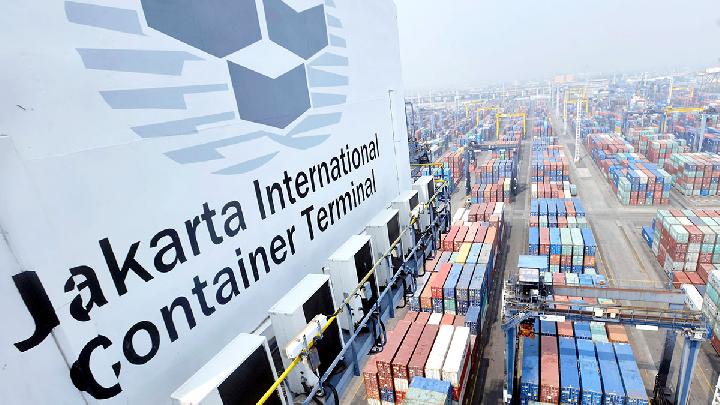 According to the contract extension, Pelindo II was to receive only US$215 million in advance leasing payments, lower than the amount which purportedly should have been received. The business valuation of this contract is considered of not taking into consideration Pelindo II’s option to manage the terminal itself.

News about the future management of JICT began in August 2014. At that time, Pelindo II announced an agreement to extend the JICT management contract for 20 years, up to 2038. This contract also dealt with changes to the stock percentages held by Pelindo II and Hutchison in JICT, as the terminal manager.

Lino claimed that the contract extension would increase the terminal’s capability, bringing it equal to that of the shipping container terminal in Singapore. At that time, the container loading and unloading process at Tanjung Priok was subject to long waits. “The port facilities were outdated and there was no investment being made,” he said.

The losses stemming from the contract extension as claimed by the DPR’s special committee could not actually be confirmed. BPK member Achsanul Qosasi said that his institution had submitted a report on their audit findings regarding the contract extension to the DPR’s special committee in 2017. “The amount of state losses in the report on the findings of the investigative audit was limited to indications of losses,” said Achsanul.

If the case was raised to a criminal investigation, the BPK would calculate the exact amount of state losses. This could end up be the same or different from the investigative audit findings.

The DPR’s special committee took the BPK’s audit findings to the AGO and the Corruption Eradication Commission (KPK) in July 2017. “In order to follow up on the findings and other important matters, the DPR’s special inquiry committee regarding Pelindo II is going to meet with the KPK,” said Pelindo II Special Committee Chairperson Rieke Diah Pitaloka in a written statement at that time.

The KPK did not follow up on the DPR report. According to one high-ranking KPK official from the 2015-2019 term, their institution did not look into the JICT contract extension because state losses had not yet taken place. “The contract was there, but the realization on its extension would not take effect until 2019. So at that time there were not as yet any losses,” they said.

Febrie Ardiansyah, Director of Criminal Investigation at the AGO’s Deputy Attorney General’s Office for Special Crimes, said that their institution has only gone as far as the witness questioning stage. The AGO has not named any suspects even though the JICT management contract extension case had already been raised to a criminal investigation.

According to Febrie, the AGO has questioned Lino’s wife, Betty Sastra, and their daughter, Clarissa Sastra Lino. “We are looking into whether they received kickbacks or suspected gratuities from that process. So each family member is being checked in turn, questioned,” said Febrie.

He said that the Lino family has turned over their bankbooks to investigators. However, the AGO cannot yet determine if any gratuities were received by Lino or his family. “It cannot yet be determined if this happened or not. That is why are still questioning them,” he said.

Lino suspects that the investigation into corruption has shifted to suspected gratuities because the AGO is not convinced that state losses occurred in the extension of the JICT management contract. When last questioned in November 2020, Lino denied the BPK’s audit findings. He considered the calculations on state losses in the BPK report were mistaken.

For instance, the BPK wrote that the financial benefit to be received by Pelindo II if the contract was extended would only entail the distribution of dividends for the 2014-2038 period, in line with the percentage of stock ownership in JICT and leasing advance payments. Whereas, according to Lino, the contract extension also included profits from returning management of JICT’s Terminal 2 to Pelindo II.

The terminal’s capacity would also be increased to 300,000 twenty-foot equivalent units (TEU) per year. From this, it is estimated that Pelindo II would make a net profit of about US$10 million annually.

If Pelindo II managed JICT by itself, the estimated revenue would not be as high as mentioned in the BPK report. That report said that Pelindo II would receive additional rental payments from other parties from 2019-2038. Those funds would not exist if Pelindo ran the terminal itself.

The BPK calculated revenue from rental payments in the self-operation option up to 2038 would be US$624.4 million. “This needs to be corrected,” said Lino. “If they operated it on their own, there would no longer be anyone making rental payments.” This means that it could so happen that the figure mentioned by the BPK would no longer exist.

He also corrected the amount of revenue for JICT from 2014-2018 calculated by the BPK. During that period, Pelindo was still cooperating with other parties to manage JICT.

The BPK report said that Pelindo II was assumed to receive US$277.9 million in rental revenue at JICT from other parties. According to Lino, Pelindo II took in US$181.15 million in rental fees over the same period because there was still a cooperation agreement under the old contract. “There is a difference in a smaller amount than that calculated by the BPK in its report, of US$96.75 million,” said Lino.

Pelindo II also had to pay a US$58-million penalty fee for terminating the contract to Hutchison in 2018. This point was not mentioned in the findings of BPK’s investigative audit. With those calculations, Lino concluded that the estimated US$306 million in state losses never actually occurred. The state, he claimed, actually benefitted by nearly US$300 million.

LONG before being targeted by the AGO, Richard Joost Lino was already a suspect at the KPK in a case of the procurement and maintenance of three quay container crane (QCC) twinlift units used for loading and unloading shipping containers at the docks in Panjang (Lampung), Pontianak (West Kalimantan), and Palembang (South Sumatra) in 2010. Lino has been accused of breaking regulations and benefiting Wuxi HuaDong Heavy Machinery Co (HDHM), the company which supplied the QCCs, by directly awarding the procurement project.

A week before their term ended, the KPK led by acting KPK Chairman Taufiequrachman Ruki signed an order on a criminal investigation against Lino on December 15, 2015. At that time, the KPK stated that it had two evidence to indict Lino. The KPK questioned 18 witnesses and experts and received an audit from the Finance and Development Supervisory Agency (BPKP).

However, this case never made it to court, even though two KPK leadership terms have passed. Nothing at all has happened with the case during the Covid-19 pandemic. It has been nearly a year since the KPK last questioned a new witness in this corruption case said to have cost the state tens of billions of rupiah in losses. Investigators last questioned Lino on January 23, 2020. “We are still looking into it,” said KPK Deputy Chairman Nurul Ghufron. 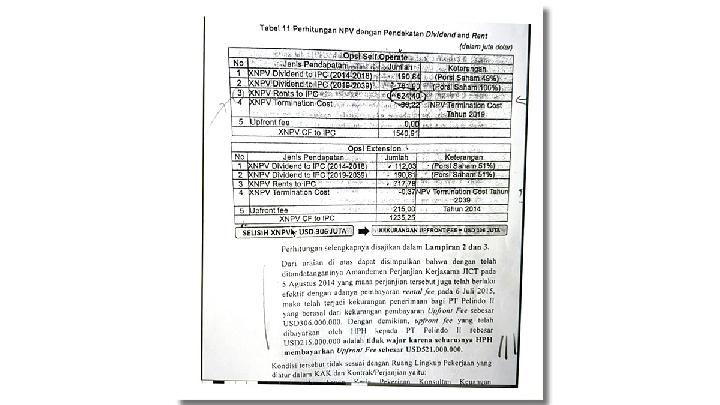 A document component in the investigative audit by the Supreme Audit Agency regarding potential losses to the state in the case of Pelindo II. Special Photo

Agus Rahardjo, KPK Chairman from 2015-2019, and the Deputy Chairman, Laode Muhammad Syarif, went as far as to visit China in 2017 to lobby them to enter into a MLA. However, Agus and Syarif only met with the attorney general and chairperson of the China’s National Audit Office. “The minister of justice, who initially stated a willingness to meet, suddenly was not giving any word,” said the law enforcement official. Agus and Syarif returned home empty handed.

As a result, the KPK could not compare the factory price of the container crane with the price paid by Pelindo II. The KPK attempted to make the calculation with the assistance of a team of experts from a state university and the BPK.

By the time Agus’ term ended in December 2019, the audit had still not been concluded. When asked to confirm this effort, Agus was reluctant to comment. “Just ask the current KPK leaders,” said Agus. KPK Deputy Chairman Nurul Ghufron replied, “We are still waiting for the audit findings from related institutions and an independent team of experts.”

In the crane procurement contract, the BPK estimated that discrepancies took place during project implementation. However, auditor cannot yet calculate the related figures. “The real cost data needed to make the calculation has not yet been obtained from investigators,” said Achsanul. “The testing of the QCC lifting capacity by the experts appointed by KPK investigators has not been done yet.”