A Forbidden Meeting at the Rectorate Building

A CALL from Imam Budi Utomo, Head of the Yogyakarta Special Region Language Center, surprised Sudaryanto on Tuesday, February 9. That morning Imam informed Sudaryanto that auditors from the inspectorate-general of the ministry of education, culture, research and technology would visit his house. From the other end of the phone, Imam informed Sudaryanto that the team was investigating the alleged dissertation plagiarism case of Semarang State University Rector Fathur Rokhman.

Sudaryanto is a linguistic expert who edited the Pepak Basa Jawa Dictionary with his colleague, Pranowo. The contents of the dictionary are quoted in Fathur’s dissertation draft on page 152. There are irregularities in the draft because the Pepak Dictionary was only published in 2001. Despite this, the dissertation concept was claimed to have been written a year earlier. The title of the book also disappears from the bibliography on pages 213-220 even though it is cited in the paper. “I wouldn’t have imagined that the dictionary would be the key evidence,” said Sudaryanto to Tempo in Sleman, Yogyakarta, on Wednesday, May 5.

Three auditors from the education ministry came to Sudaryanto’s house and were accompanied by two officials of the Yogyakarta Language Center. They interviewed the doctor who graduated from Gadjah Mada University (UGM), Yogyakarta, regarding the publication of the Pepak Dictionary. Sudaryanto explained to the team that the book had just been edited in 2001 and distributed to participants in the third Javanese Language Congress which took place at the Ambarrukmo Hotel, Yogyakarta, in July 2001. At that time Sudaryanto was appointed as chairman of the steering committee.

The team also had time to check the only Pepak Dictionary that Sudaryanto kept at his house. According to him, the auditors only needed a glance of the year of publication on the front page of the book. Shortly after, he was asked to write a letter stating that the 1,113-page dictionary was actually published in 2001. Sudaryanto signed a stamped statement. “It must be clear on paper because this is a serious problem,” he said. 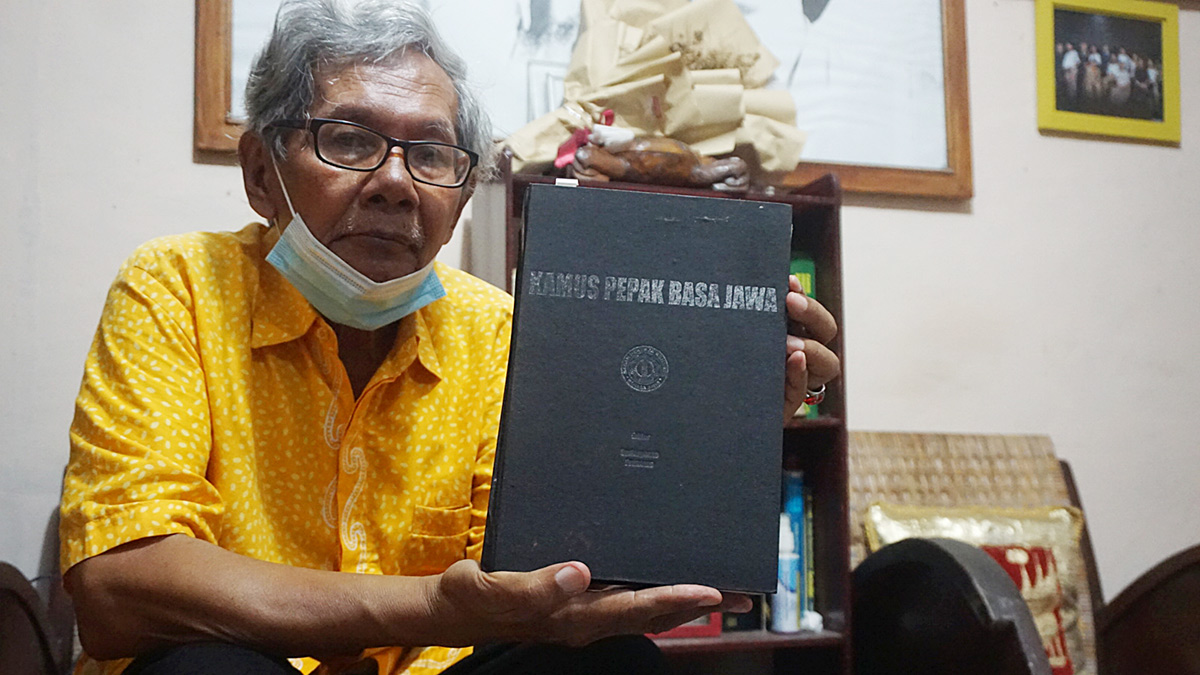 The editor of a Javanese language dictionary, Sudaryanto, shows the dictionary’s publication date at his home in Yogyakarta, May 5. Tempo/Shinta Maharani

Sudaryanto’s examination is part of the second chapter of audits conducted by the education ministry to investigate alleged plagiarism by Fathur Rokhman. In the second week of August 2020, the ministry’s inspectorate-general sent a team to Semarang State University (UNS). The search was carried out after 33 UNS lecturers wrote to the Education and Culture Minister Nadiem Makarim, around February 2020. The letter described 15 irregularities in Fathur’s leadership as rector, including plagiarism in his dissertation at UGM and his scientific works in a number of journals.

In Semarang, Central Java, the auditor team examined a number of witnesses, including several people from the UNS academic community. Sucipto Hadi Purnomo, a lecturer in Javanese Language and Literature Education, who is aware of the investigation, said that the team from the ministry allegedly received ‘facilities’ from the rector during the investigation. Sucipto is a former member of the Academic Performance Evaluation team formed by the ministry of research, technology and higher education which also investigated the plagiarism case of Fathur Rokhman in 2018. “The team examined all witnesses at the rectorate building and were served meals by the rector,” he said.

Two people from the academic community of the UNS claimed to have met a high official of the inspectorate-general in Semarang on November 28, 2020, a month after the first audit report was completed. The two sources have both been suspended for investigating the irregularities in the leadership of the UNS Rector.

The two sources said that the high-ranking ministry official expressed his frustration with the audit results of his subordinates by slamming the examination documents onto the table. The bureaucrat at the education ministry of was also upset after finding out that the investigating team used the UNS rectorate building and received a meal during the investigation. According to them, this official promised to investigate again and directly supervise the investigation team.

The second audit was accelerated after the Indonesian Caucus for Academic Freedom (KIKA) released an academic review report on Fathur Rokhman’s dissertation last January. As a result, the KIKA team stated that Fathur’s dissertation titled Use of Language in a Bilingual Society: Sociolinguistic Studies in Banyumas, which was completed in 2003 at the UGM Postgraduate Program, was plagiarism.

During the second audit, Deputy Minister of Justice and Human Rights Edward Omar Hiariej sent a message to the UGM Rector Panut Mulyono regarding the plagiarism case of Fathur Rokhman. Before becoming deputy minister, Edward was a lecturer at the UGM Faculty of Law who had studied Fathur’s case. In a snippet of conversation that Tempo saw, Edward advised UGM to be cooperative and objective. According to him, if it is proven that there is an engineered dissertation draft, it will not only be considered plagiarism, but a criminal act of forgery.

Edward reminded that the mistake could have fatal consequences if it proceeded to court. Panut also agreed to Edward’s suggestion that the UGM be willing to assist the education ministry’s inspectorate-general in investigating the plagiarism case of Fathur Rokhman. The professor of the UGM Faculty of Engineering promised to review the decision of the campus if Fathur Rokhman’s dissertation draft written in 2000 was proven to be plagiarism.

To Tempo, Edward admitted that he was no longer following the development of the plagiarism case of Fathur Rokhman. He stated that he had investigated the case last year and at that time the UGM had found no copyright infringement in Fathur’s dissertation draft. “I did say to the rector that if there is a new development from the ministry of education, it is better to be cooperative,” he said.

The Inspector-General of the Ministry of Education, Chatarina Muliana Girsang, said that the investigation into Fathur Rokhman was resumed because there were new reports and evidence. She said that her institution had investigated the plagiarism case of the rector of UNS twice, but refused to disclose the audit report because it was claimed to be confidential. The audit has been submitted to the directorate-general of higher education. Regarding Fathur’s removal, the ministry will follow the regulations. “There are steps that need to be taken,” said Chatarina. 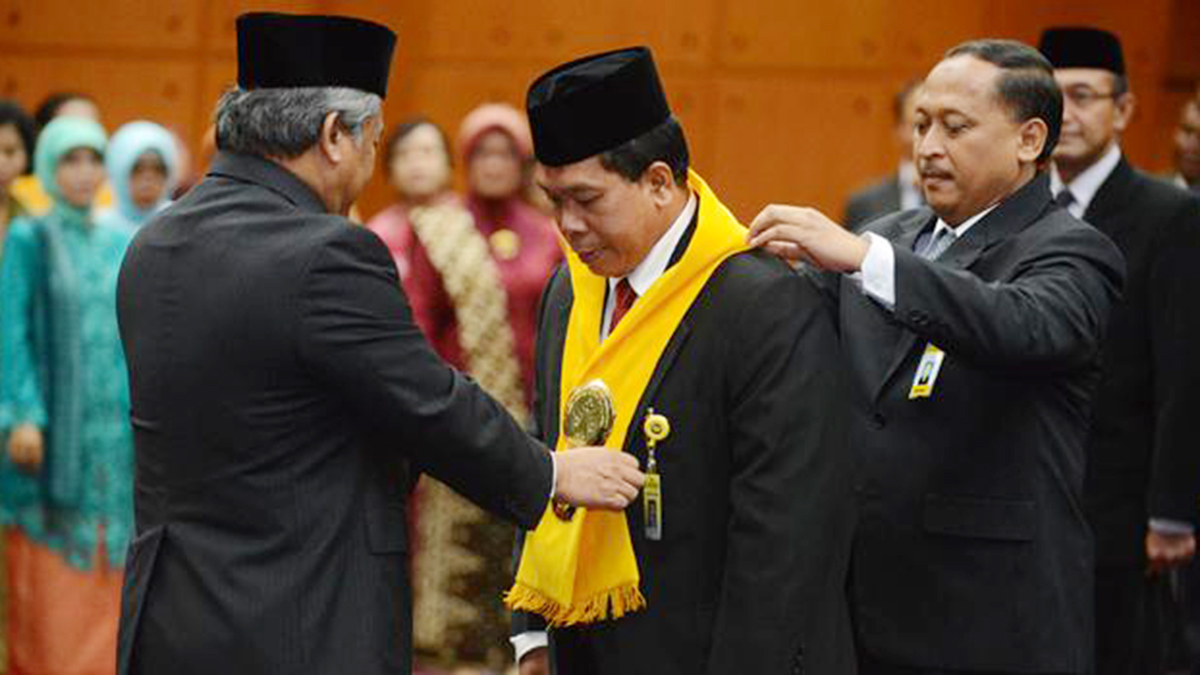 Fathur Rokhman being inaugurated as rector of the Semarang State University at the Ministry of Education and Culture, Jakarta, June 2013. unnes.ac.id documentation

The ministry of education has also notified the UGM about the results of the investigation. A number of sources familiar with this investigation said the ministry issued two recommendations. First, to request UGM Rector Panut Mulyono to review the decision regarding Fathur Rokhman’s dissertation which was previously declared legitimate. Second, following up on the results of the UGM Honorary Council decision in March 2020 which suggested revoking the doctorate degree as stipulated in the National Education System Law because Fathur’s scientific work was proven as plagiarism.

Revocation of academic degrees is further regulated in the Education Minister Regulation No. 17/2010 concerning the prevention and eradication of plagiarism in higher education. Article 12 paragraph 3 states that the ministry on the campus proposal can remove the title of professor if it is proven to have committed plagiarism. Director-General of Higher Education Nizam said that his institution did not want to rashly remove Fathur Rokhman’s position as rector or his professor title. According to Nizam, the ministry will hear opinions from legal experts before making a decision.

Head of UGM’s Public Relations and Protocol Division Iva Ariani said her institution had received a letter from the education ministry. However, she is unaware of its contents. Meanwhile, a member of the UGM Academic Senate, Sigit Riyanto, confirmed that the results of the Ministry’s audit had arrived at his campus. The Dean of the Faculty of Law received information that the ministry’s audit report corroborated the findings of the UGM Honorary Council.

Fathur Rokhman insisted that he has not plagiarized his work. He referred to the report on the results of the ministry of education’s audit with registration 3020/666/RHS/WS/2020 which was signed by the Inspector-General of the Ministry of Education, Chatarina Muliana Girsang, on October 27, 2020. Fathur claimed that the contents of the audit document stated that the allegations of plagiarism in his dissertation were not proven. The audit was also said to have strengthened the findings of the team formed by the UGM rector as stated in a letter dated April 2, 2020. “We are grateful that the issue of accusations against us has been completed, clear, and final,” said Fathur.

Gadjah Mada University Rector Panut Mulyono did not respond to an interview request sent to his personal number until Monday, May 10. Meanwhile, Deputy Rector for Education, Teaching and Student Affairs, Djagal Wiseso Marseno, and Deputy Rector for Cooperation and Alumni Paripurna Poerwoko Sugarda declined to comment. “No comment. Not my field,” said Paripurna.