The virtual police took action against social media accounts considered to have posted content containing hate speech and hoaxes. Some people who have been critical of the government received warnings as well.

AROUND two hours before midnight, the @surabayamelawan Instagram account received a message on Friday, February 26. The sender was the @siberpoldajatim account, which has 2,208 followers. Claiming to be from the Special Crimes Investigation Directorate, the sender asked the manager of the @surabayamelawan account to delete a posting to social media which was considered to be a violation of the Electronic Information and Transactions (ITE) Law. However, no information was given as to what content was deemed to have broken the law.

That day, Everdine—as the holder of the @surabayamelawan account wishes to be called—uploaded a video compilation. It consisted of a comparison of busts of market vendors during large-scale social restrictions (PSBB) and the crowd when President Joko Widodo visited Maumere, East Nusa Tenggara. The video mentioned that the President could avoid any penalties, which the common people have to accept sanctions for violating health protocols. “It is as if the space for the public to speak has been shut down,” said Everdine, who asked that their true identity be concealed for reasons of safety, on Wednesday, March 24.

Everdine paid no attention to the police warning. The video content in question has remained available on that Instagram account having more than 28,000 followers. As of March 27, the video had been watched 13,000 times. The @surabayamelawan account has not been blocked and is still uploading content criticizing the government. One was a meme on the policy on importing commodities such as rice and corn, which was posted on March 26.

Edy A. Effendi, holder of the @SulukMalam Twitter account, received a similar reprimand from the police on February 23. The sender was the official account of the Directorate of Cybercrimes at the National Police’s Criminal Investigation Department, @CCICPolri. He received this warning after commenting on the posting of Antonius Benny Susetyo, a special staff member of the board of directors of the Agency for Pancasila Ideology Education (BPIP), questioning Jakarta continually being beset by floods. Effendi called Benny a kafir (infidel) and accused him of being intolerant. “In terms of the logic of language, a Muslim can also be a kafir,” he said. 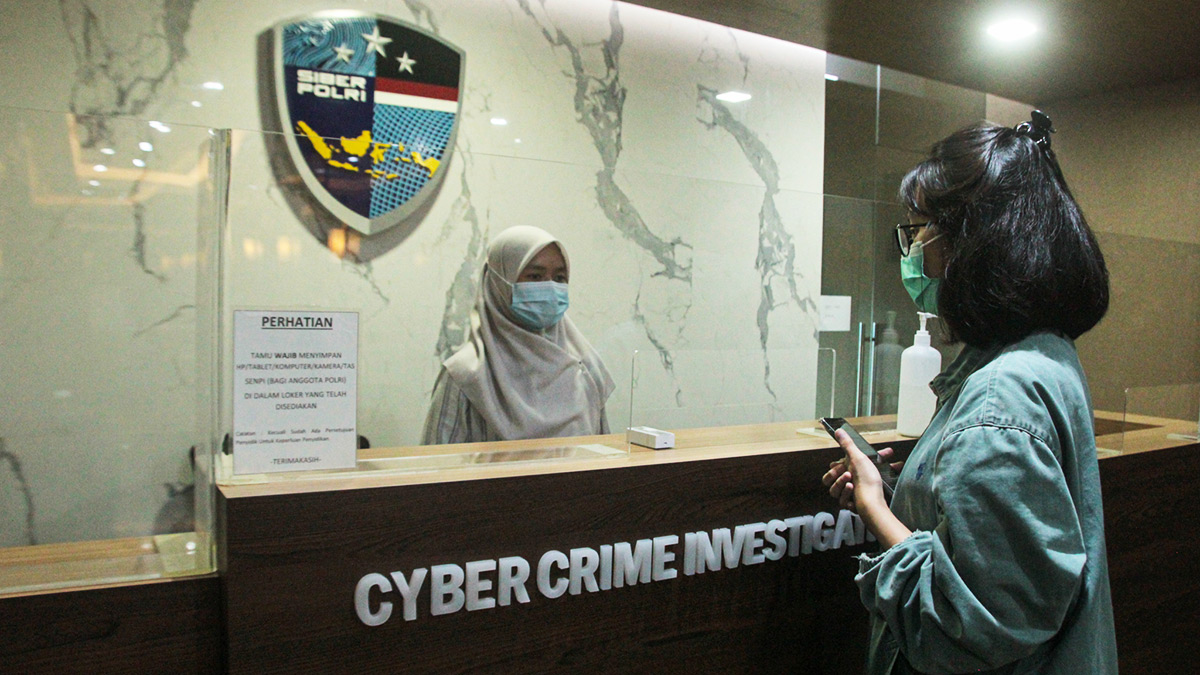 The police cyber directorate sent a direct message to Effendi asking him to correct that content, because it was deemed to contain hate speech. If it was not corrected, he would be subject to a legal process. However, Effendi attempted to refute this. He asked what sort of correction the police were seeking and called on the administrator of the cyber directorate account to discuss the matter of the logic of language. However, he received no response. “It was like I received a threatening love letter,” said Effendi.

The following day, Effendi corrected his tweet. In that posting, he mentioned that Benny is an official in the BPIP yet is involved in handling flooding in Jakarta. A link to the cyber directorate’s account was included in the tweet.

Last March 13, Arkham Mukmin, a resident of Slawi, Tegal Regency, Central Java, was detained by the Surakarta City Police Department after posting a satirical comment against Surakarta Mayor Gibran Rakabuming Raka. Using the @garudarevolution account, Arkham commented about that son of President Joko Widodo in connection with the location of the holding of the Menpora (Ministry of Youth and Sports) Cup soccer competition. Arkham doubted Gibran’s knowledge about soccer. “What does he know about soccer. He was just given his position,” Arkham wrote in his personal account, @arkham_87.

The Surakarta Police cyber patrol team sent a warning, but was not heeded. The police then summoned Arkham because it was deemed that he had refused to delete the posting. A video apology from Arkham was then uploaded to the @polrestasurakarta Instagram account on March 15. Accompanied by a man wearing a black shirt, with a black backdrop with the words “Don’t Easily Make Comments Which Are Not In Line With the Facts,” Arkham asked Gibran to forgive him in the two-minute video. He said that he regretted what he had done, and promised to never do it again.

Senior Comr. Iskandar F. Sutrisna, Chief of Public Relations at the Central Java Police Department, denied that the police arrested Arkham. According to him, the Surakarta City Police only reminded Internet users, including Arkham, not to break the ITE Law. “After the account holder was educated to immediately delete his posting, the person in question realized his mistake and apologized,” said Iskandar.

As of Thursday, March 25, the National Police’s Cybercrimes Directorate had verified 113 accounts which were proven to have posted hate speech. However, the police were only able to send warnings to 58 accounts. Their messages failed to reach the others because the Cyber Directorate’s account was blocked by account holders, or the content in question was deleted before the warnings were sent.

THE National Police Headquarters started a virtual patrol of the social media after the issuance of National Police Chief Circular No. SE/2/II/2021 dated February 19, 2021 regarding ethical culture awareness to create Indonesian digital space which is clean, healthy, and productive. Signed by National Police Chief Gen. Listyo Sigit Prabowo, that circular was made after President Joko Widodo ordered police to make guidelines for interpreting the ITE Law, because of the many cases of citizens reporting each other to the police.

Sigit claimed that the purpose of the virtual police is to monitor, educate, and warn the public, and to prevent them from committing cybercrimes. “If there is hate speech, a virtual police application will identify and send a warning message to the account holder,” he said.

Some civil society organizations criticized the use of virtual police. Rivanlee Anandar, a researcher at the Commission for Missing Persons and Victims of Violence (Kontras), said that the cyber patrol tends to limit the public’s freedom of opinion. According to him, the virtual police program does not have any clear method of monitoring content, which has the potential to create abuses of authority.

Damar Juniarto, Executive Director of the Southeast Asia Freedom of Expression Network (SAFEnet), explained that the virtual police program oversteps their duty and authority as found in the Police Law. Those who are warned do not have any recourse to defend themselves. “The cyber patrol is used to excessively discipline citizens,” said Damar.

According to him, the massive scale of the virtual patrol is reflected in the procurement of infrastructure at National Police Headquarters. On the National Police’s electronic procurement contract bidding site, the police have spent at least Rp1.8 trillion on software and hardware since 2016, with the smallest contract worth about Rp85 billion. That equipment has been installed at, among other places, the police’s Intelligence and Security Agency and the National Police’s Criminal Investigation Department. SAFEnet alleges that the equipment in question is not only used to patrol cyberspace, but is also utilized in activity to build up narratives about government policy, such as the passing of the omnibus law.

However, Insp. Gen. Prabowo Argo Yuwono, Chief of National Police Public Relations, disagrees that the virtual police program is stifling freedom of speech. He claimed that the police are attempting to educate the public about good Internet behavior. As for the large expenditures on equipment, Brig. Gen. Slamet Uliandi, National Police Director for Cybercrimes, claimed that they were appropriate. “We are carrying out the functions of public safety and public order,” he said.

The activity of the virtual police is controlled from the National Police Criminal Investigation Department Building at Jalan Trunojoyo in South Jakarta. Located in a room the size of two badminton courts, the office of the virtual police team is divided into two areas: social media profile researchers and analysts. In the research area there is a huge screen in front of more than 20 computers which are used by the operators.

When Tempo visited the police’s virtual command center on Thursday, March 25, there were nine officers in the research area and two in the analysis area. The officers wore plain, mostly black, clothing. They each looked at dual computer monitors.

A tall and slender man wearing glasses sat in the back row. He was busy using a computer mouse and watching the 22-inch monitor on his left. The Instagram account of someone suspected of posting a hate speech was on the screen. After searching for the profile of the account holder, the man then made a screenshot of the Instagram account. The image was then put into a Microsoft Word document. “Our output is information reports,” said the man who was reluctant to give his name.

Brigadier Gen. Slamet Uliandi said that all of the members of the cyber patrol team are active-duty police officers. The team is divided into three shifts, each working for about eight hours. “They have criminal investigation backgrounds,” said Slamet.

An officer who accompanied us during the visit said that police officers could work overtime if there is a topic being heavily debated on the social media. This officer cited the polemic over the ingredients and side effects of the AstraZeneca vaccine, which resulted in the cyber patrol team working for scores of additional hours. This officer said that some narratives were connecting the vaccine’s ingredients with a certain ethnicity.

The mapping of social media accounts which break the law is also done through reports received from the public on the Cyber Directorate’s official website. After processing them into information reports, the target content is studied by the team of analysts and leaders, along with some experts, including those in criminal law and sociology. These deliberations usually take place during evaluation meetings which take place daily, starting around 4pm.

Trubus Rahadiansyah, a lecturer at Trisakti University’s Faculty of Law, is one of the experts brought in by the Cyber Directorate. According to him, the content evaluation meetings usually last an hour. Trubus said that he often gives input regarding the impact from individual social media postings. He cited many social media postings referring to the Chinese and infidels, which could trigger hate. “We only give input. The police determine whether or not to send a direct message,” he said.

Police Brig. Gen. Slamet Uliandi said that not all of the information reports from the team lead to the sending of warning messages to social media account holders. The virtual police team would not send any direct messages if there are no elements of fake news or hate speech. Slamet said that the police would not take any action against accounts which criticize the government, as long as they are conveyed in a civilized manner. “We prioritize preemptive and preventative measures,” said this Class of 1991 Police Academy graduate.